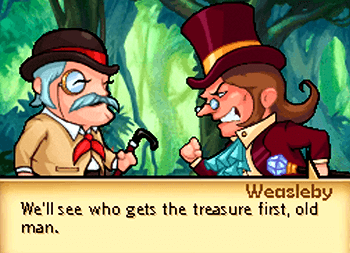 In a plot based on this trope, a principal character who is supposed to be significantly older than most is opposed by a villain who is relatively young and apparently in their physical prime.

The plot often leads to a fight in which the young villain sneers that their victory is inevitable because they're younger than the older hero.

In these kinds of plots, the young villain will typically be introduced as they one-up the old hero as a part of their scheme, because You Can't Thwart Stage One. However, the older hero eventually rises again and soundly defeats the young villain. At or near the end, the old hero proclaims something like "I may be older, but I'm better!" Furthermore, the other principal characters quickly agree that the older hero is still a valuable member of the team.

Usually, what eventually causes the scales to tip back in the hero's favor is that them being older also means that they are wiser and the fact that Youth Is Wasted on the Dumb. The hero might realize that while they might not be able to defeat their younger opponent through physical strength alone, they can outsmart the villain, either through superior combat experience if it comes to a direct confrontation, or, if the hero is the more shrewd type, by playing on their opponent's youthful recklessness and impatience and trick them into doing something that becomes their own undoing.

Contrast Pick on Someone Your Own Size, Evil Old Folks, and Kid Hero. Can be the result of someone Avenging the Villain. The young villain can also be a Pupil of the Older Hero Until They Turned To Evil. See Antagonistic Offspring for when the Younger Villain is the Older Hero's child and Intergenerational Rivalry.