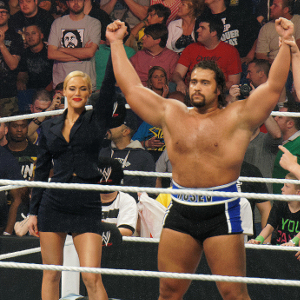 Get used to seeing this.
Advertisement:

Following his WWE debut, Rusev had a long streak without being pinned or made to submit (although he has numerous losses by disqualification), and is a three time WWE United States Champion, defeating Sheamus in a WWE Network-exclusive match following Monday Night Raw on November 3, Kalisto at Extreme Rules 2016, and Shinsuke Nakamura on the 2018 Christmas Special episode of SmackDown Live. His undefeated streak, along with his first championship reign, were ended by John Cena at WrestleMania 31.

During the late winter and spring of 2015, Lana became increasingly popular with fans, prompting writers to facilitate a face turn for her. A storyline was conceived wherein dissention began building between Rusev and Lana during a feud with John Cena. Following several weeks where Rusev talked down to Lana and sent her from the ring during his matches, things came to a head at the WWE Payback pay-per-view event, where Cena defeated Rusev in an "I Quit" match. Rusev complained a night later on WWE Raw that he did not quit, but Lana stood her ground and said that he did indeed submit, saying the words in his native Bulgarian tongue and that the referee clearly understood he quit. When Rusev began to threaten Lana, Dolph Ziggler came out to step in, and he and Lana kissed passionately in the ring. An upset Rusev knocked Ziggler down before focusing on Lana, and it seemed like he was going to brutally beat her into a pulp, but moments before his pent-up rage burst, Ziggler knocked him down from behind and left the ring with Lana. Rusev then got together with Summer Rae in a less-than-dignified copycat of his old dynamic with Lana, resulting in a couple vs. couple feud which was supposed to culminate in Lana's first match until she went down to an injury. During her time off, Rusev and Lana got back together off-screen at the point of Miro and CJ's real-life engagement becoming a tabloid headline.

Rusev was released by WWE on April 15, 2020, along with dozens of other wrestlers and staff as part of cost-cutting measures during the COVID-19 Pandemic. After changing his public name to Miro (shorthand for Miroslav) to become a Twitch streamer and content creator, Miro announced on July 30 that he had no interest in returning to wrestling again....

...for all of four-months, as on September 9, 2020, he returned to wrestling as a member of All Elite Wrestling under his Miro name. On the May 12, 2021 episode of AEW Dynamite he defeated Darby Allin to become the TNT Champion.

On June 2, 2021, three weeks after Miro claimed the TNT title, Lana was one of six wrestlers released by WWE. 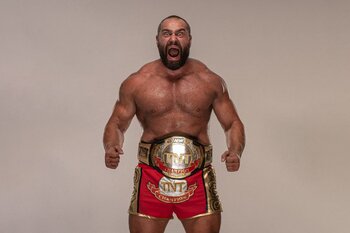