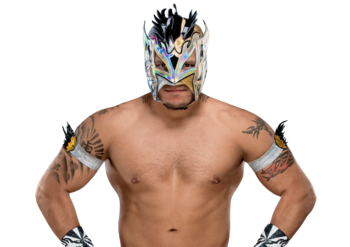 Emanuel Alejandro Rodriguez (born November 14, 1986) is an American professional wrestler best known for his time in WWE as Kalisto.

He made his initial debut in 2006 on the independent circuit as Samuray del Sol. He would later join AAA, for whom he wrestled as Octagón Jr. He eventually left AAA due to his busy independent schedule, and continued to work for smaller promotions until 2013, when he signed on with WWE's NXT brand, taking on the name Kalisto. In 2014, he, with Sin Cara, won the NXT Tag Team Championship.

In 2015, he was promoted to the main roster, and in 2016, won the United States Championship twice. In 2017, he won the WWE Cruiserweight Championship for the first time.

In 2021, Kalisto was released from WWE during a round of budget cuts.