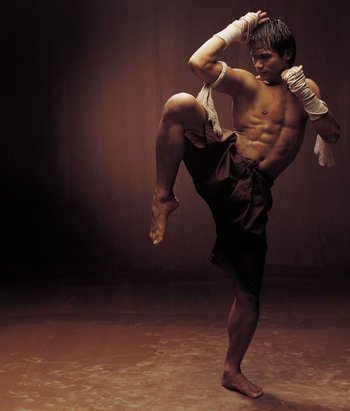 TIGER KNEE!
Muay Thai (translated as "Thai boxing") is a Thai martial art and combat sport. Also known as "the art of eight limbs", it stands out as an aggressive style of striking based on the usage of fists, elbows, knees and shins/feet, complete with some throws and sweeps.
Advertisement:

Its origin can be traced to the ancient Siamese jungles, where a style called Muay Boran ("ancient boxing") was created for ceremonial purposes and self-defense. It was first highlighted in legendary battles against the nearby kingdom of Burma. The sport of muay thai as we know it came to be at the beginning of 19th century, when kings Rama V and VII codified its rules and introduced gloves and rings like in British boxing. By this way, muay thai became a very popular and culturally-tied form of prizefighting, and it built its center on Bangkok, where its violent and bloody matches started taking place on the now famed Lumpinee Stadium.

In our modern popular culture, muay thai became known mainly thanks to the rise of professional Kickboxing and Mixed Martial Arts, in which it soon established itself as the crown jewel of striking styles due to its flexibility, efficiency and physical preparation. However, you may possibly know it thanks to film star and notable exponent Tony Jaa, who gave us films like Ong-Bak, or thanks to the Kickboxer series.

Practitioners of the sport are called Nak Muay. The uniform consists solely of shorts, gloves and sometimes ankle wraps.

Note that "muay thai" and "kickboxing" are often used interchangeably, but reality is much more complicated. While muay thai is a form of kickboxing, technically speaking, it contains a set of moves, rules and cultural practices that are tied solely to the style practiced in Thailand. The rising popularity of the art caused that many forms of Western kickboxing are called by this name, which adds confusion when said forms are dissimilar and/or unrelated at all to the Thai source (good examples are the Dutch, Japanese and Brazilian schools).

Muay Thai has cousins throughout Southeast Asia in the form of other stand-up, kickboxing styles with clinching and knee/elbow strikes, with similar but distinct techniques and rules. These include Tomoi from Malaysia (which is directly descended from Muay Thai as it was introduced by the Siamese communities in Kedah and Kelantan before the Islamization movement in the 80s), Muay Lao from Laos, Pradal Serey from Cambodia and Lethwei from That South East Asian Country, all of which appear to be related to Musti Yuddha, or ancient Indian kickboxing. The heritage and development of these related but unique styles are subjects of heated debate and national pride to some, but Muay Thai is indisputably the dominant style internationally.