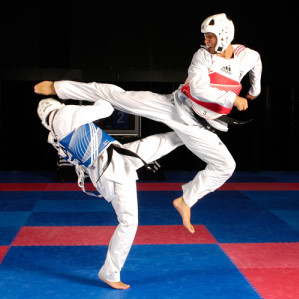 Attack its weak point for massive damage.
Taekwondo or Tae Kwon Do (translated as "the way of the hand and the foot") is a Korean martial art and combat sport. It is a striking art which utilizes hands and specially legs, featuring a large acumen of kicks of all sorts.
Advertisement:

Korea's own contribution to modern martial arts, taekwondo was created after the Japanese occupation of the country, emerging from a number of different schools as a mixture of Karate and native fighting styles like taekkyon. The art's definitive shape would appear after its adoption by the South Korean army, which unified all the existent schools and gave birth to Tae Soo Do, which would be renamed Tae Kwon Do. The sport would be governed by the Korean Taekwondo Association and its more known offspring, World Taekwondo Federation (WTF, later reduced to World Taekwondo to prevent the obvious jokes with the acronym), but also by a controversially parallel body called International Taekwondo Federation (ITF), founded by Chong Hong Hi, who is called by many the true founder of the art. Over time, it became an Olympic sport and gained millions of adepts.

Practitioners of the sports are called Taekwondoin, although it's also common to hear Taekwondist or some idiomatic variation nowadays. Equipment consists in a white uniform called dobok which is a modified version of the judogi used in Judo, composed of a vertically closing jacket and long pants, either in white or black, tied by a belt called tti. Also, competition usually requires a full set of body armor, composed of head protector, chest plate, forearm guards and shin guards.

Taekwondo is quite popular in media due to the high spectacularity of its kicks. Its practitioners will jump, spin and fly, doing a heavy emphasis on agility and mobility rather than stability, and rules often endorse this kind of attack by giving points to the most complex and/or technical pirouette. It should be noted, however, that taekwondo is very stylistically separated in terms of competition, depending on which of the mentioned two federations hosts it.