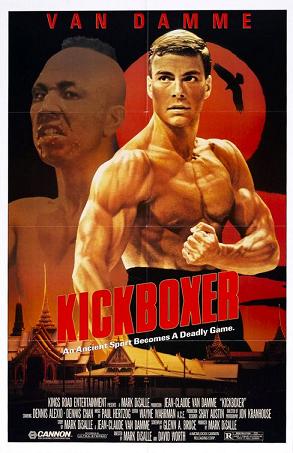 It focuses on two brothers, Kurt and Eric Sloane, who go to Bangkok to challenge Tong Po, Thailand's undefeated Kickboxing champion. After a brutal first round, Kurt realizes that the two are out of their league against this guy, and tries to convince his brother to stop the fight, but Eric is unwilling to give up and goes for a second round against him. Tong Po proceeds to hand Eric the worst beating of his life, culminating in paralyzing him from the waist down despite Kurt throwing in the towel in a bid to stop the fight. Kurt is mad as hell and vows to avenge his brother by defeating Tong Po.

Winston, Kurt's friend, is at first reluctant to help Kurt in his quest for revenge, but eventually tells him about a guy by the name of Xian Chow, a locally famous Muay Thai trainer, who might be able to train him in the martial art. Xian Chow puts Kurt through a hellish training sequence that hones his skills as a kickboxer. Along the way, he also meets Mylee, Xian's pretty niece who soon becomes his Love Interest, and makes an enemy of Freddy Li, a local Thai mobster whose men are continually threatening and stealing money from her. After Kurt proceeds to take down Freddy's men in a barroom brawl, Xian is able to arrange a match with Tong Po on Kurt's behalf, a match where both fighters will fight in the "ancient way" — both fighters wrap their hands in hemp rope, which is then coated in resin and dipped in broken glass to make them deadly weapons.

In the days leading up to the big fight, things go straight to hell for the people that Kurt loves. Mylee is viciously brutalized by Tong Po, and Eric is kidnapped by Freddy Li with the intent of blackmailing Kurt into Throwing the Fight. To save his brother's life, Kurt is instructed to go the distance with Po before losing the match. Kurt endures a torturous beating at Tong Po's hands, but Xian and Winston are able to find and rescue Eric before the fight can conclude. With Eric out of danger, Kurt is free to exact vengeance for Eric and Mylee and take down Tong Po once and for all.

Four sequels were released since the first film:

In 2016 the series was rebooted, with Alain Moussi in the Kurt Sloane role and Van Damme in a Remake Cameo as Master Durand. The films in this series were: