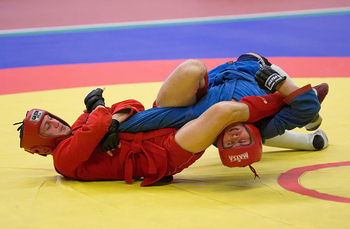 From Russia with locks.
"If sambo was easy, it would be called jiu-jitsu."
—Khabib Nurmagomedov
Advertisement:

Sambo (acronym for an expression translated as "unarmed self-defense") is a Russian martial art and combat sport. It is a direct offshoot of Judo mixed with several Eurasian wrestling styles, and as such, it is based around throwing the opponent to the ground and/or lock him with wicked joint locks and chokes, combined with minor striking. It was originally created as a military hand-to-hand style in the vein of Krav Maga, but very unlike the latter, it has adapted very successfully to sports competition, being a semi-popular fixture of Professional Wrestling and Mixed Martial Arts.

Practitioners of the sports are sometimes called sambists, but it is not usual because that is also how practitioners of samba are called. Equipment in sambo consists of shorts, a loose jacket named kurtka and wrestling shoes, as well as a number of protective gear pieces depending on the kind and level of competition.

The whole thing was the brainchild of two military hand-to-hand experts: Vasili Oshchepkov, an apprentice to Jigoro Kano and judo teacher for the Red Army, and Viktor Spiridonov, an expert in many forms of traditional wrestling who developed an interest in Japanese concepts due to a crippling war wound. Independently from each other, they started elaborating their own versions of a grappling style that would contain all what they knew and could find out about wrecking people. Added to the efforts of avid sportsman Anatoly Kharlampiyev, a disciple to Oshchepkov who had the political connections to get it done, what is known today as sambo took a recognizable form in 1938, becoming the official fighting style of all of Russia and its native badasses. Ironically, and because this was USSR, Oshchepkov ended up accused of being a Japanese spy and executed after being arrested by a squad of his own trainees; he was posthumously declared innocent many years later, but by then it's not like he cared anymore.

In the sports aspect, despite looking more like judo without pants than wrestling, sambo was recognized as a wrestling style by Fédération Internationale des Luttes Associées in 1968, after which it spread to the whole world. It actually seemed on the way to be an Olympic discipline for a while, but politics intruded again in its way, and due to the 1980 Olympic boycott that rose after the Soviet invasion of Afghanistan, sambo stayed firmly out of the Olympics, which many people regard as a good thing overall seeing what happened to judo and its infamous Olympic rule changes. Also, being still technically a hybrid of judo and wrestling mixed with striking, sambo also helped to make the Russian fighting scene a closed-knit circuit, with many wrestlers, judokas and even boxers and kickboxers often cross-train with each other in a regular basis; most sambists in Russia also compete as judokas or wrestlers, and vice versa.

As happened with Catch Wrestling, sambo became surprisingly popular in Japan, where it was introduced mostly by Russian-Japanese master Victor Koga. He taught its techniques to legendary pro wrestler Satoru Sayama, who introduced them in the style of Japanese pro wrestling named "shoot-style" and contributed to shape it as a fighting style full of leglocks and spectacular wrestling. Another shoot-stylist, Akira Maeda, traveled to Russia and recruited a bunch of sambo champions for his RINGS promotion, a pro wrestling circuit that evolved over time into mixed martial arts, also creating the first Russian MMA camp in the process. Therefore, just like shoot-style used to be the usual background of Japanese fighters, sambo is nowadays the background and main fighting style of most MMA fighters from the former Soviet Republics, as opposed to the Brazilian Jiu-Jitsu that dominates the sports everywhere else. Fedor Emelianenko and Khabib Nurmagomedov are good examples.

In competition, sambo is divided in several styles.