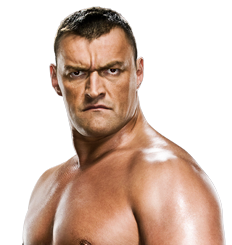 Oleg Aleksandrovich Prudius (born April 27, 1979) is a Ukrainian-American martial artist, Professional Wrestler and actor best known for his time in WWE from 2006-2009 as Vladimir Kozlov. After making some appearances in the crowd where he would be interviewed and finish by saying, "I love Double Double E," he was sent down to WWE's developmental programs at Deep South Wrestling and Ohio Valley Wrestling, where he would become a 1x OVW Heavyweight Champion

. He made his official WWE TV in-ring debut in 2008. He would feud with Triple H, Jeff Hardy, Christian, and JTG of Cryme Tyme. He is a 1x WWE Tag Team Champion

with Santino Marella. He currently competes for the Inoki Genome Federation in Japan.