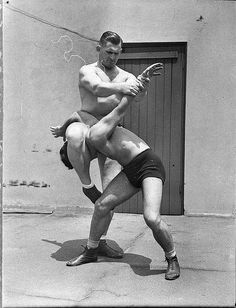 Don't feed the wrestlers.
Catch wrestling, also known as catch-as-catch-can, is a classical combat sport and form of entertainment developed in Britain in the 18th Century. The style actually an umbrella term for several forms of wrestling and grappling styles based around pinning, joint locking and strangling, though it is actually much more known for being the grandfather of modern Professional Wrestling.
Advertisement:

Catch wrestling's history is a blurred affair. We know the name of the discipline comes from English styles of folk wrestling characterized by their violent and open rulesets, most specifically the Lancashire, Cumberland and Westmoreland styles, where it was a popular entertainment and source of bets for coal miners in the 1800s. It's also known that the art was shaped further in the American and European travelling funfair and carnival scene, where huge mustachioed strongmen would challenge members of the crowd to beat them in a wrestling contest for a reward, often letting them have the advantage for a time to entertain the crowd and entice more challengers before defeating them painfully. In any case, catch wrestling would become synonymous with spectacle, sweat and men wrenching each other's bones in front of cheering crowds.

However, always in search of the contentment of the audience and the money they would throw, catch wrestling would take over the years a road to theatricality and showmanship over all-around competitions. Matches became deliberately back and forth instead of being boring stallfests or fast squashes, wrestlers started taking on larger-than-life gimmicks with heroes and villains, and finally, "worked" elements like tag team bouts, female wrestlers and weapons were introduced to spice up the party. Catch wrestling stopped being a competitive sport and turned into the violent soap opera we know and love as Professional Wrestling – or did it?

Distinguishing catch wrestling from pro wrestling today is pretty much impossible due to how enrooted the former is to the latter and how the latter never distanced itself much from the former despite what you would believe by watching WWE. However, the tradition of the art as a legitimate fighting style survived in the strangest places, namely Japan, Brazil and some ramshackle gyms in the Anglophone sphere.

Alternative Title(s): Catch As Catch Can