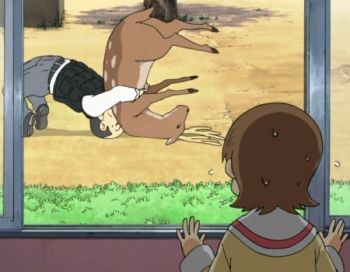 A suplex is any Professional Wrestling move that starts with both people in a standing position, where one person lifts another off the ground and then drives him down with the first points of contact being the back, neck, or back of the head. Countless variations exist, and it is common for a wrestler to specialize in a specific type

(German, Tiger, Dragon, Super, any variation of the wrestler's belly/back facing the opponent's belly/back, etc.). Suplexes are often also used by characters in other storytelling formats outside of Professional Wrestling.

This is for a number of reasons:

Sub-Trope of Wrestler in All of Us.