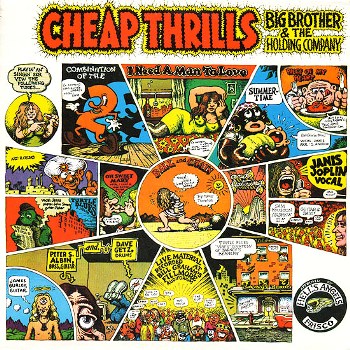 Take another little piece of my heart.
Advertisement:

Cheap Thrills is the second studio album by Big Brother and the Holding Company, released in 1968. It is their last studio album to feature lead vocalist Janis Joplin, who chose to leave the band to go solo not long after release. The closing track on the album "Ball and Chain" was recorded live at the Winterland Ballroom. This album features the band's Signature Song "Piece of My Heart". The album cover is also famous, being drawn by Underground Comics icon Robert Crumb.

In 2013 it was added to the National Recording Registry for being "historically, culturally and aesthetically important".