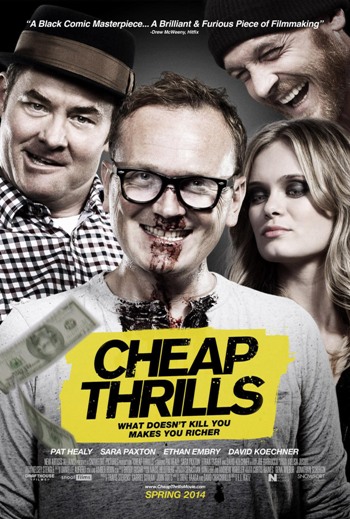 Cheap Thrills (2013) is a black comedy thriller directed by E.L. Katz. It debuted at film festival SXSW in 2013 and was commercially released March 24, 2014.

Craig (Pat Healy) is a father, a husband, and a blue-collar worker who loses his job the same day that he receives an eviction notice. Dejected, he goes to a bar, where he meets his old high school friend Vince (Ethan Embry). The two old friends cross paths with a rich couple (Sara Paxton and David Koechner), who make them an offer: the first one to down a shot gets $50. Things escalate from there, with the dollar amounts increasing and the challenges getting wilder to match them, and Craig and Vince race each other to claim those cash prizes. The film slowly takes on a darker tone as Craig and Vince are forced to consider what lengths they'll go to in the name of money.