Music / WHEN WE ALL FALL ASLEEP, WHERE DO WE GO? 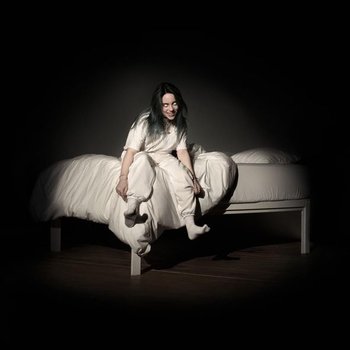 WHEN WE ALL FALL ASLEEP, WHERE DO WE GO? is the debut studio album by American singer-songwriter Billie Eilish and her first collection since the 2017 EP, dont smile at me.

Co-written by Eilish and her brother Finneas O'Connell and produced by O'Connell, the album was promoted by five singles, starting in July, 2018, and leading up to its release in March, 2019: “you should see me in the crown”, “when the party’s over”, “bury a friend”, “wish you were gay”, and “bad guy”. It set the record for most pre-ordered album in Apple Music history and debuted at number one on the US Billboard 200, making her the first artist born in the 21st century to reach that slot.

The album’s sound is an eclectic blend of dreamlike Indie Pop, Synth-Pop, and contemporary blues, with a lyrical focus on the dark and esoteric.

It swept the 62nd Annual Grammy Awards, winning Album of the Year and Best Pop Vocal Album, "bad guy" winning both Song and Record of the Year, Eilish herself winning Best New Artist, and Finneas individually receiving Producer of the Year and Best Engineered Album (both non-classical). Eilish became the second-ever (and the youngest ever, and the first female) artist in Grammy history to win all 4 major awards at once.

Tropes appearing in this album: