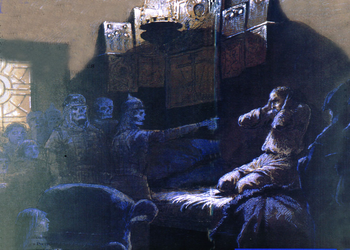 The deeds of your days may become the demons of your nights.
"You know I still have dreams, right? Of the explosion? And- And of the fireworks? And... And all of it! I- I still vividly see all of it, every day. It hurts!"
— Tubbo, Dream SMP
Advertisement:

Bob has been through a world of hurt, and he's still living with the pain. He suffered some horrible injury. He saw his loved ones brutalized or murdered. He had to Shoot the Dog and has been living with the guilt ever since. Maybe it was even all of the above.

But Bob doesn't want anyone else to know he's hurting; not him, not Bob The Stoic. He won't even say Don't You Dare Pity Me!; he would if anyone showed him pity, but his pain is too well concealed for that. He won't even suffer a Not So Stoic moment or brush off the tears that come in a rare unguarded moment with "There's Sand In My Eyes."

So how do you show the readers (and sometimes the other characters) that Bob's impassive demeanor is the result of superhuman control and iron will, not a sociopath's Lack of Empathy? How do you show his breaking heart without risking Character Derailment (or interfering too much with the flow of the story)?

You give Bob bad dreams.

There are various options:

The instant Bob wakes (often by bolting upright in bed), he will be back to his stoic self. However, the dread of more nightmares makes him likely to avoid sleeping as long as possible, which can prove dangerous if these are Recurring Dreams. If he woke everyone else up with his screaming, he will apologize for disturbing them — usually — but he won't tell them what disturbed him.

If Bob is a significant character, the audience will expect the plot to address his nightmares — and the pain behind them. It can be as simple as Bob telling someone else about his trauma, especially if the other is skilled at helping Bob talk through his pain and coming to an insight that helps him break free of it. If the nightmares stem from My Greatest Failure, they play out similarly to Anxiety Dreams: the nightmares will go away if Bob faces the problem a second time and does it right.

Being the outward sign of inward pain, bad dreams are obviously more likely for characters who keep their feelings on the inside: the Stoic, the Emotionless Girl, Broken Bird, and the like (whether Bob hides his pain from everyone or just from one particular person). But they can be a useful tool for demonstrating trauma for — and humanizing — anyone, since no one can control their dreams. May be used to reveal the true character of No Hero to His Valet (type 2), or to demonstrate that Being Evil Sucks, or to show that The Alcoholic is Drowning My Sorrows. The Captain is prone to this trope because they cannot show weakness in front of their people and feel responsible for any injury or death that befalls those in their care.

Bear in mind that this trope is not just the dream of a past event, no matter how horrible. Past-Experience Nightmares are in the story to reveal Bob's hidden pain when he would never, ever show it voluntarily.

This trope seldom overlaps with prophetic dreams because it would be too confusing: no one would be able to tell if Bob's dream of the villain shows a past encounter or a future one. Nor does it tend to cross with dream communication unless the author deliberately wants to make it difficult for Alice to reach Bob because his dreams get in the way. May feature in a Fever Dream Episode. Compare Your Worst Memory; contrast Dreaming of Things to Come and Talking in Your Dreams.

If Bob also suffers from Trauma-Induced Amnesia, this trope can overlap with Dreaming the Truth. These are often Recurring Dreams, at least by implication. May be caused by buried memories from Alternate Identity Amnesia. And yes, nightmares as the sign of past trauma are Truth in Television.