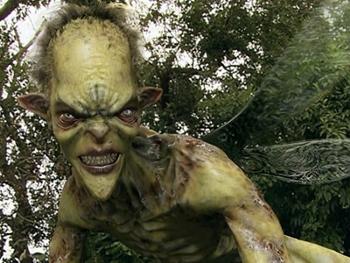 Were you expecting Tinkerbell? 'Cos she would sure be a sight for sore eyes right about now...
Gwen: Are we talking alien?
Jack: Worse.
Gwen: How come?
Jack: Because they're part of us. Part of our world, yet we know nothing about them. So we pretend to know what they look like. We see them as happy, we imagine they have tiny little wings and are bathed in moonlight.
Gwen: But they're not?
Jack: No. Think dangerous. Think something you can only half-see, like a glimpse, like something out of the corner of your eye. With a touch of myth, a touch of the spirit world, a touch of reality all jumbled together, old moments and memories that are frozen in amongst it. Like debris, spinning around a ring planet, tossing, turning, whirling... backwards and forwards through time.
— Jack explains to Gwen how humans have painted a pretty picture about creatures that are nothing of the sort.
Advertisement:

The Torchwood team finds itself against its first non-alien threat yet!... Faeries.

The episode opens with nice old lady Estelle finding a hidden grove and taking some snapshots of what very much appear to be faeries. It's only after she walks away does their true monstrous form become apparent, but only to the audience.

Cut to a young schoolgirl named Jasmine waiting after class. When her stepfather is late picking her up, she decides to walk and is rather conspicuously tailed by an unsavory character. His advances are derailed by the girl's little faerie friends. While he makes his escape, he finds himself continually tailed by these friends, and begins to cough up rose petals. He eventually turns himself in to the police, but to no avail, as he's later found dead inside his cell. Also, Jack is lying on his bed shirtless, thinking about his time in the war. Since he's previously established that he doesn't sleep, one has to assume it's a hobby.

Torchwood is called in on the unusual death. Jack recognizes the culprit and contacts Estelle. The two reminisce about Estelle's history with "Jack's father" and discuss her fascination with faeries and the photographing of them. Gwen dismisses the idea that real faeries could be involved. Jack is more concerned with the fact that Estelle seems to think they're benevolent. Jack's suspicions are confirmed when Estelle is later found dead drowned by a severely localized rainstorm. It is, of course, revealed that the one who loved Estelle all those years ago was Jack himself.

Meanwhile, Jasmine's mother and stepfather are continually concerned over her antisocial behavior and not having any friends, hobbies, or interests outside of playing in the garden with her imaginary friends. An altercation with school bullies causes a severe windstorm that Torchwood picks up on and gets Jasmine's name. Jasmine's stepfather, taking a heavy dose of "jerk", decides to fence up the garden that Jasmine plays in, and even slaps her around when she protests. Naturally, the faeries take umbrage at this and their attack begins just as Torchwood arrives on the scene. The stepfather is killed by the faeries and Jasmine escapes into the garden.

Jack explains that Jasmine is a "Chosen One" to the Faeries, a human child to be taken by them and made one of them. The Faeries are ancient creatures that have considerable power over time and reality. In Jack's past, his entire company of soldiers under his command was killed after accidentally killing a "Chosen One", and the Faeries promise much worse should Jasmine be denied to them. Jack allows Jasmine to be taken, claiming he had no choice in the matter.

Thus, the Faeries get off scot-free, three people are dead, one woman is now without a boyfriend and daughter, and everyone gives Jack a proper glare for doing, well... jack-all. Torchwood literally did nothing to influence the episode's events in any way. Oh, and there's a little bit at the end where Gwen expands one of the Cottingley Fairy photos

and notes that Jasmine appears in it as a Faerie.

Written by PJ Hammond, best known for Sapphire and Steel.