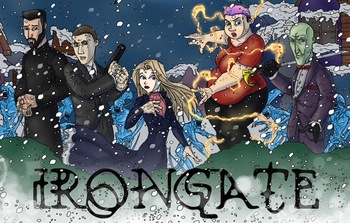 is a Web Comic series about a centuries old organization of the same name which battles supernatural forces. Their people have secretly lived, fought and died in this service, but now the shadows in the world have grown darker. To gain an edge, one of the organization's directors has formed a group based on a previously unthinkable idea: recruiting people afflicted by the supernatural to act as a type of special forces.
Advertisement:

The series is written by Michael Campbell, drawn by William Leighton and currently coloured by Christiane "Hapycow" Rosin. The series started in October 2014 with an seven page prologue and it's first volume Whiteout debuted in December. This ran for sixty four pages and concluded in Januart 2017. Since then there has been no further activity.

Embers was enchanted by the Fey as a child and has the ability to create and throw fire, including using it to fly. She was recruited by Agent Luke Chase for IronGate from a mental health facility. She seems to have hidden herself away there because she felt it was safer to be there than out in the regular world.

Luke Chase has been an agent within IronGate for some time, at the beginning of the series he was selected by Director Marcus to lead a new team of IronGate agents made up of people affected by the supernatural.

Dorian is withered and cynical man from the Victorian era, who has somehow survived into modern times. He seems to be able to shrug off even serious injury with no obvious impact.

As a young lady during the American Gilded Age she was turned into a vampire, she's spent over a century hiding what she'd become from the world. After being contacted by IronGate she happily joined the organization.