Webcomic / Least I Could Do 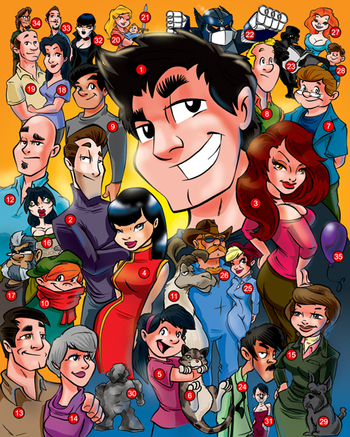 One of the three webcomics from the creative team of Ryan Sohmer and Lar DeSouza (the others being Looking for Group and The Gutters). Least I Could Do

is mainly a gag-based comic strip about the misadventures of a group of longtime 20-something geek friends living in the city. The stories mainly revolve around sex, love, modern life and all things geeky from Star Wars to Star Trek to The Lord of the Rings to comic books to video games and back again. Mostly, it's about their relationships and sex though.

The main character is the incredibly promiscuous Rayne, who, if you were to judge lecherousness on a scale of one to ten with ten being the highest a human could possibly be, would probably hit somewhere around a 23. Throw in a lot of Idiot Hero, a few dashes of Manchild (with a few hints of Psychopathic Manchild), and a lot of Jerkass and you will have a pretty good idea of what to expect from Rayne, although there are many occasions where he shows Hidden Depths behind the intentionally and unapologetically shallow face he presents to the world.

The rest of the main cast consists of:

Sohmer had tried to get a LICD cartoon pilot off the ground. He asked $75,000 (half the projected budget, with him footing the other half) from his fans; by the projected deadline, around 1,200 backers had donated well over $100,000.

The pilot can be found on Vimeo, albeit unofficially. You can also buy the video on the official iPod/Android app. It was never picked up due to various reasons.

You can find the comic at http://www.leasticoulddo.com/