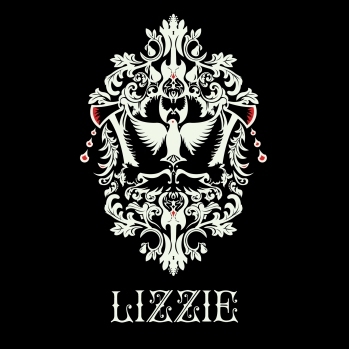 Let us take you to an August back in 1892, when all hell broke loose in the House of Borden...
In the house of Borden,
somebody left us quite a mess.
Splattered blood and brains on everything,
except on Lizzie's dress...
—Bridget Sullivan, "The Fall of the House of Borden"
Advertisement:

Lizzie (often stylized as LIZZIE, sometimes incorrectly referred to / previously known as Lizzie Borden) is an American musical written by Steven Cheslik-deMeyer, Tim Maner, and Alan Stevens Hewitt. It's a four-woman rock concert/musical hybrid, taking inspiration from riot grrrl music, old school queer politics, and '70s girl punk. It was born in the early '90s, but first performed as a piece of theater in 2009. Since then it has enjoyed a European tour (including a Danish translation) and several American runs.

In the August of 1892, Andrew Borden and his wife Abby were found murdered in their home in Fall River, Massachusetts. Famously, Andrew's younger daughter Lizzie was the prime suspect. Although Lizzie was acquitted in court, she was Convicted by Public Opinion, and many to this day believe that she was the murderer. This musical spins its own version of the Borden murders; Act One covers the weeks leading up to the deaths, while Act Two covers Lizzie's trial. Although we will likely never know for sure who killed Mr. and Mrs. Borden, the show is firmly in the "Lizzie did it" camp. Or, at the very least, Lizzie thinks she did. Given that Andrew and Abby Borden never show up and the murders are performed on messy fruits, it could have just happened in her mind. However, she is still portrayed sympathetically. Whether you believe Lizzie was the culprit or not, the show isn't about historical accuracy — it's about telling a good story, with some kick-ass music to go with it.