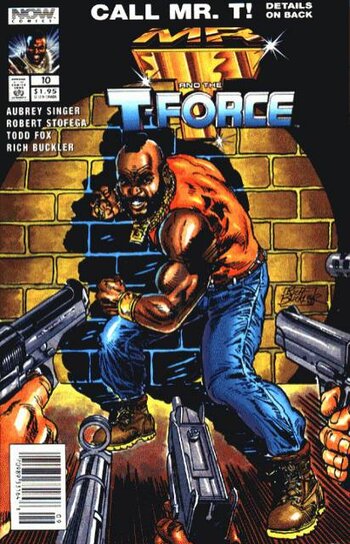 I pity da foo' who don't read this comic, suckahs!
Calvin: Well, you know what historical fiction is? This is sort of like that. I'm writing a fictional autobiography. It's the story of my life, but with a lot of parts completely made up.
Hobbes: Why would you make up your own life?
Calvin: Because in my book I have a flamethrower!
— Calvin and Hobbes
Advertisement:

Webcomics are pretty informal. All you need is an idea, a modicum of artistic talent, and somewhere on the internet to host it. And hey, there are plenty

The result is that an author is often pretty laid back about where exactly the line between Real Life and The 'Verse lies. We're talking about things past Author Avatar here. Way, way, past Reality Subtext. We're talking a protagonist whose name is the same as the author's Screen Name, and who has the same attitudes and interests (except that he also has Impossibly Cool Hair). We're talking a supporting cast that strikingly resembles the author's friends, except that they're always funny and one of them is probably a talking animal or something. We're talking about how they attend a Wacky College that seems identical to the one the author attends, except that the unpopular teacher is some kind of Orc or Robot and there's a portal to another universe in the basement.

If the comic gains an audience, the creator may attempt to remake the story to something that won't attract libel lawsuits. On the other hand, many don't bother: only a privileged few webcomics succeed well enough to make money, and... we are all pretty informal around here.

If Life isn't actually Embellished in the comic, then it's simply a Journal Comic. Can also overlap with Slice of Life.

In Literature it is also known by the phrase "creative nonfiction."