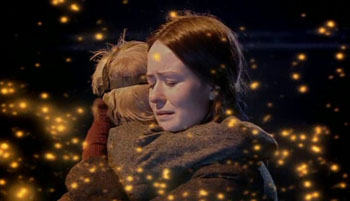 "Yes, I am your mummy. I will always be your mummy."
"The world doesn't end 'cos the Doctor dances."
— Rose Tyler
Advertisement:

The one where Everybody Lives!

Did you ever think those two sentences would be together? No, nor did we!

The Doctor, Rose and Jack desperately try to escape the gas mask people and figure out what the hell is going on. While Jack teleports away, Rose and the Doctor are trapped for a while, and Rose takes the opportunity to ask the Doctor if he can dance like Jack can. The Doctor is a bit offended, and says he's actually got quite an amount of experience with... dancing. Rose really can't picture him... dancing. While the Doctor steps closer and takes her hands for an intense... dance, they fail to look around and realise that Jack's already saved them. It also turns out that Jack isn't exactly with the Time Police anymore; he turned rogue after waking up one morning and finding that two years of his memory had been wiped by his employer.

Jack goes off to distract a gay crash site guard with his suave, omnisexual allure, and the Doctor explains to Rose that Jack is, quote, "just a bit more flexible when it comes to... dancing". In Jack's century, people will travel the whole universe to find aliens of all sexes and genders, and... dance with them. Meanwhile, the virus becomes airborne and everyone around the warship crash site starts mutating.

Seeing the crash site, the Doctor figures it out: the Chula warship was a field ambulance,note Well, technically, as Jack points out, ambulances are used in war, thus making them warships by definition... and contained nanobots (here called "nanogenes") for expedient battlefield healing. When Jamie was first hit by the ship, the nanogenes swung into action and tried to fix him... but they'd never interacted with humans before, and so derived their idea of what humans looked like from a badly wounded kid in a gas mask. They sort of made it up as they went along — assuming that fully healed people wore gas masks, they made the people they "infected" sprout gas masks. But when they finally met Nancy (really Jamie's mother, not his sister), they had a different model of a healthy human being to work towards... and the parent/child relationship between the subjects meant that the nanogenes knew that this pattern was the right one.

Everybody Lives as the Doctor re-infects everyone with the nanogenes, who now know how to fix humans. Even previously dead humans. Hooray! It goes better than expected, because at least one person grows their whole leg back, so it's safe to say everyone even got their war wounds reversed. Jack uses the Chula ship to suspend the dropping of the bomb that was supposed to blow up in the location the Chula ambulance crashed, "Schlecter Wolf" (Roughly translated as "Bad Wolf" — Arc Words strike again!) He flies off into space. The Doctor decides the evidence of an alien race needs to be wiped out to keep history sterile. He makes the Chula ambulance self-destruct when the area is clear of people, reasoning, "History says there was an explosion here. Who am I to argue with history?" with Rose replying, "Usually the first in line."

The Doctor and Rose return to the TARDIS, with the Doctor apparently knowing what Rose wanted for Christmas when she was twelve and having a part in getting it. But mostly ecstatic that everybody lived... until Rose wonders what happened to Jack.

Jack Harkness is flying through space in his handy Chula ship, but he only delayed "Schlecter Wolf" from its volcano day. The WWII bomb is about to go off, and Jack cannot stop it from blowing him and his ship into space dust. After bickering with the A.I. of his ship under the false hope there might be an escape pod somewhere, he is repeatedly told not so, until the A.I. flatly spells it out for him that he is 100% doomed. Resigned to his fate, he orders an Emergency Protocol 147 — a martini... with too much vermouth. Jack is going to drink to his own death and go out with a bang, reminiscing about the time he got out of it before by charming his executioners into bed with him...

Cue the faint sound of vintage swing music from afar. The TARDIS has docked to Jack's ship long enough for him to cross over and let the bomb wipe out the last trace of the Chula civilization without him on board. The Doctor has given him a lift after Rose's concerns set off the alarm bells in his head to pick up Jack so the bomb won't get him. He tells Jack to hurry up and get in the TARDIS, but to also shut the door — there will be quite a draft when the explosion strikes. Needless to say, Captain Jack joins the TARDIS, saved by the Doctor just before his ship goes kablooey in an attempted Heroic Sacrifice. He walks in to find the Doctor and Rose... dancing. Rose asks if Jack would like to cut in and also... dance. The Doctor, amused to have an openly not-straight companion, wonders which of the two Jack would... dance with.

"Everybody lives, Rose. Just this once, EVERYBODY LIVES!!"