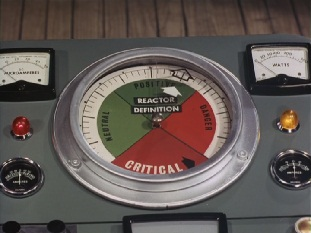 Sci-fi reactors are usually based on the idea that a nuclear reactor is a continuous nuclear explosion in a really strong box. Therefore, reactors are a type of Sealed Evil in a Can, just waiting to blow the hell out of everything once the shielding is cracked. Calling any device a "reactor" creates the expectation of an explosive reaction. There are other names that can be used for this event; "meltdown", "destabilizing", "going critical", or something more fanciful.

In fiction, the word "reactor" seems to mean exclusively nuclear reactions, despite the word being common enough in chemistry since "reactor" simply means where a reaction happens. Another contrast between fiction and reality occurs with the term "critical". Fiction uses the word to say "it's going to explode!", whereas real nuclear physics use it to say "the reaction sustains itself", so a reactor is critical if it's on. Relatedly, "supercritical" simply means the reaction is increasing in power, and a surge of power causes "prompt critical", which means the reaction is critical solely from the "prompt" neutrons created by fission events, which means an explosion is imminent.note Since a neutron in flight cannot be controlled by processes working at human time scales, reactors are designed to be critical with the "delayed" neutrons released by subsequent isotope decay. This may have happened only once, in the SL-1 reactor accident

. (Designed bombs, on the other hand, go "prompt supercritical".) Also incorrect is "meltdown", meaning an explosion suspiciously similar to that of an atom bomb, or at least large enough to blow the vehicle/facility in question to pieces. In real nuclear physics, meltdowns are just that - the fissile core melts into slag, hot enough to flash coolant into steam (wherein you get the associated bang) and possibly melt through the reactor vessel.

All reactors currently in use are designed with safe failure modes in mind; the worst you really get from a land-based reactor failing is to get a reactor container full of "corium", which is essentially lava formed from whatever was in the reactor core at the time and is as radioactive as you'd expect from a reactor's worth of nuclear fuel. The famous disasters are caused by the corium melting through safety features. On a sea vessel, the contamination would be horrific; the reactor mass would come into direct contact with the seawater, and shatter or even be entirely vaporized to small particles (fallout) in the massive subsequent vapour flash explosion. Radiation will be an issue inside the facility, and widespread fallout of the kind associated with nuclear war only occur when the containment systems have been ruptured. Long story short, a meltdown is extremely bad news, but orders of magnitude less bad than even small (i.e. tactical) nuclear weapons.

This trope is even less realistic when dealing with nuclear fusion. While there are no fusion reactors currently in service for power generation, all proposed designs would be even safer in the event of a failure, as without magnetic confinement of the reaction, it just stops.

A subtrope of Artistic License – Nuclear Physics. See also Containment Field. When a reactor "goes critical" but is then turned off with no consequences, it's Instant Cooldown.