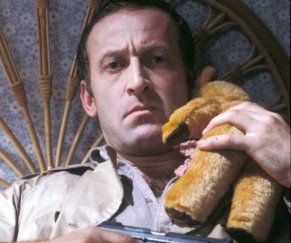 Millions of years ago when the Earth was cold, it looked like life on the planet would cease to exist. But black flowers began to grow, multiplying across the landscape until the entire surface was covered in blooms. Slowly, the blackness of the flowers sucked in the heat of the sun and life began to evolve again. That is the power of Gaia. The planet will protect itself. If man is the enemy, it will destroy him.
— Emma Craven
Advertisement:

A classic - perhaps the classic - British Conspiracy Thriller. Troy Kennedy-Martin — of Z Cars and The Italian Job (1969) fame — wrote the screenplay as a cry of anguish against the contemporary political situation, and was rather startled when The BBC decided to produce and broadcast it.

On original broadcast, it proved so popular that, immediately after it finished its run on BBC Two, it was repeated on BBC One, a unique occurrence in the history of British Television. It was praised, and awarded, for its acting, scripting, and direction, and launched the career of Martin Campbell, who would later go on to direct GoldenEye and Casino Royale (2006) for the James Bond franchise - and who cast Joe Don Baker as a cheery CIA agent in GoldenEye in direct reference to his role in this series. Oh, and Eric "Slow Hand" Clapton collaborated with Michael Kamen to write the show's distinctive, haunting score.

Ronald "Ronnie" Craven (Bob Peck, who won a BAFTA) is a Detective Inspector in the Yorkshire Constabulary; he was decorated for bravery in the line of duty during his time in Northern Ireland. His wife died of cancer, roughly a decade ago, since when he has brought his daughter Emma (Joanne Whalley) up single handed. As the story opens, she has grown up to be a politically radical student, who seems to be the only remaining person on the face of the planet who can make him smile. Ronnie drives her home from a political meeting — trying to keep her out of the rain, which has become absurdly and suspiciously heavy — whereupon she is shot dead by a balaclava-clad thug wielding a sawn-off shotgun. Later, a grieving Ronnie is going through Emma's belongings; he finds a loaded gun, a geiger counter, her vibrator, and her old teddy-bear.

The police investigate briefly, but rapidly abandon their investigations, leaving Craven to use his contacts, wits, and determination to unravel the mystery. Or, at least, to attempt to do so.

Craven encounters, on his travels, the bullish, beaming CIA agent Darius Jedburgh (Joe Don Baker), two extremely affable men who might - or might not - work for British Intelligence, a host of other twilight figures who might be good or bad or both or neither, and - frequently - Emma herself. Emma's post-mortem appearances are not explained; she could be symbolic of his obsession, a useful stalking horse to let the writers exteriorise Craven's inner dialogue, an on-screen symptom of Craven's mental breakdown, or an actual ghost. The series doesn't ever commit to any of those, although there are elements of mysticism in the rest of the story that mean that even the ghostly explanation - ordinarily unlikely in the context of a deathly serious modern thriller - cannot be dismissed out of hand. Indeed, as written, the original ending featured Craven turning into a tree. Thankfully, the production team were willing to tell even Troy Kennedy Martin to think again.

This series was given a Hollywood film adaptation in 2010, also titled Edge of Darkness.

Some of the following tropes may have been identified wandering the rain-swept hills above the Northmoor facility: