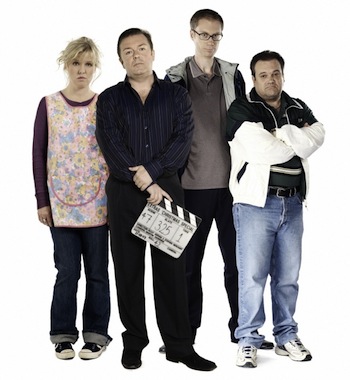 Cringe Comedy Brit Com by Ricky Gervais and Stephen Merchant, starring Gervais as an out-of-work actor scraping by as an extra in the British film industry, with Ashley Jensen as his socially inept friend and fellow extra, and Merchant as his spectacularly incompetent agent. In the second season the story evolved as Gervais' character became the star of a popular but critically-reviled sitcom.

It had so many celebrity guests during its twelve episodes that the (officially untitled) episodes are often referred to by who was guest-starring. They were often playing versions of themselves, but one that was very conceited, vain or stupid.

Concluded with a Christmas Episode, which gave it an identical run to The Office.