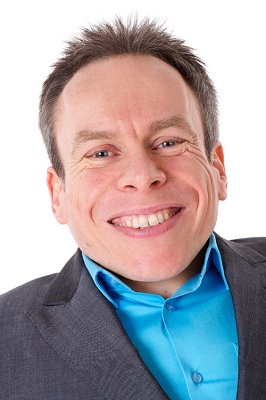 "I don't want to be just somebody short who happens to act. I hope my legacy will be Warwick Davis, Actor."
Advertisement:

Since his debut playing the Ewok Wicket W. Warrick in Return of the Jedi at the age of twelve and his Star-Making Role in Willow at the age of eighteen, he went on to play roles in many major franchises, including two different versions of The Chronicles of Narnia and he played three different characters over the course of the Harry Potter films. In The '90s, he starred in his own series of slasher films, Leprechaun, which may come as a surprise to fans who discovered him through his more family-friendly roles. He also starred in Ricky Gervais' 2011 series Life's Too Short.

that specializes in representing performers on the extreme ends of the height spectrum. Davis has spondyloepiphyseal dysplasia congenita ("spinal end-of-bone congenital malformation"), which is a rarer cause of dwarfism (compared to the more common achondroplasia, which his wife Samantha has). All of his children inherited that condition, including the two who survived into adulthood, Annabelle and Harrison.

He's also recently founded his own theatre company, the Reduced Height Theatre Company as an opportunity for short actors to get away from the panto, sci fi, and fantasy roles they usually get Type Cast in and prove their acting chops in the classical roles they usually don't play. They toured the UK with a production of the classic farce See How They Run