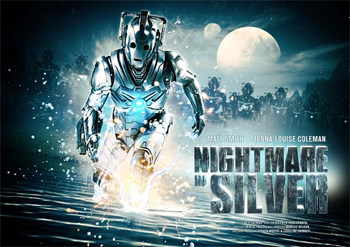 They're baaaack...
"Hail to you, the Doctor — SAVIOUR of the Cybermen!"
— Cyber-Webley
Advertisement:

The one where the Doctor slaps himself.

Hedgewick's World of Wonders is known as the greatest theme park in the universe. The Doctor takes new temporary companions Angie and Artie Maitland to the park for a fun day out (he's got a golden ticket and everything), but the TARDIS parks them there a few decades too late, after the whole place has been shut down. Instead of the Spacey Zoomer and free ice cream, team TARDIS finds an army platoon that has been sent there (mostly to keep them out of everyone else's way) and a caretaker named Webley. The Doctor runs a Bavarian Fire Drill and pretends to be a high-up envoy of the emperor, who's been missing for a number of years. He decides to hang out with Webley for a bit just to show the kids a good time.

Webley has an empty Cyber-suit in his home, which he uses as a parlour trick when he gets people to play chess with it

. Inside is actually a little person nicknamed "Porridge" (Warwick Davis!) who quickly befriends Clara. Just as the whole gang is about to head back home, the Doctor realises that things are very wrong on this planet, and goes off to investigate, telling the kids to stay put. They don't, of course, and while Angie, Artie and Webley get kidnapped and put into a "walking coma" by the quickly revived Cyberman, the Doctor is infected by Cybermites (like Cybermats, only quite tiny) and turned into a magnificently Large Ham in the process. The Cybermen were only looking for clever young children, like Angie and Artie, but a Time Lord is infinitely more useful. And they really didn't expect to find one here... after all, the Doctor has been deleting himself from history across the universe.

The Doctor tells the Cyber-Planner, who's taking over the Doctor's mind, that he could simply commit Heroic Suicide and regenerate on the spot to destroy the Cyber-Planner's implants — and, via the Cyberiad network, every Cyberman it controls. Instead, they battle it out both in the Doctor's subconscious and over a game of chess. The Doctor's fully aware that the Cyberplanner will betray him no matter who wins, but does what he can to protect the children. Meanwhile, Clara takes full advantage of the Doctor's Bavarian Fire Drill and takes charge of the platoon. She spends most of it trying to prevent the soldiers from blowing up the planet, since that's been their modus operandi ever since the last war with the Cybermen. They even blew up the Cybermen's entire galaxy. Porridge tells Clara that he feels tremendously guilty over that — because no matter how much he tries to think about all the lives that were lost that day, all he can really bring himself to care about is the poor man who had to push the button.

The Doctor temporarily manages to short-circuit his cyber parts using his golden ticket and tries to avoid Clara's difficult questions about the things the Cyber-Planner has been telling her — about her being "impossible", for one. When he finally manages to use the platoon's gadgets and his own screwdriver to remove his cyber parts and gets the kids out of their comas, Angie points out what's been glaringly obvious to her all along: Porridge is the missing galactic emperor. Porridge explains that his off-planet army can transmat them all out within seconds, so blowing up the planet was actually a pretty viable idea all along. And he's so impressed by Clara's leadership skills that he asks for her hand in marriage. She declines, to Angie's great annoyance.

The Doctor drops the kids off back home, and Clara joins them, telling the Doctor he can pick her up again next Wednesday.