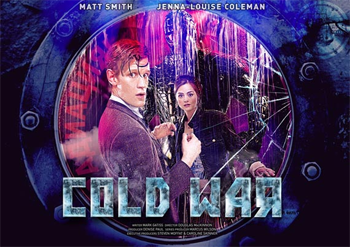 The one with the Ultravox fan.

Written by Mark Gatiss, and the first television appearance of the Ice Warriors since 1974's "The Monster of Peladon".

The Doctor and Clara land on a damaged Soviet nuclear submarine at the height of the Second Cold War, in 1983 (instead of, as they were aiming for, Las Vegas), as it spirals out of control into the ocean depths. They immediately get captured while the TARDIS vworps off without them, leaving them stranded in a submarine that's (a) slowly filling up with water and (b) home to a massive chunk of excavated ice with an Ice Warrior stuck inside it. The Doctor decides to cut straight to the point and explains that he's a time traveller. He confronts the Ice Warrior as gently as possible, and learns that his name is Skaldak — the greatest war hero in Martian history. Unfortunately, one of the crew electrocutes Skaldak out of sheer terror, and the Doctor realises that to the Ice Warriors, this can only be seen as a provocation into interstellar war.

Skaldak is chained up, and Clara volunteers to negotiate with him as a neutral party, someone who — unlike the crew and the Doctor — has never seen war. Skaldak sees right through her plans, and directly addresses the Doctor via Clara's headset. Clara, scared of out her mind but trying to remain stoic, soon notices that there's something wrong with Skaldak... and finds out that he's escaped from his chained-up armour, and the contraption of wires and scales is left behind as a husk. It's also sending out an interstellar distress call. It isn't being answered, and Skaldak is forced to come to terms with the idea of being the last of his kind.

While Skaldak rushes around the submarine, killing people from the shadows and dissecting them for information on mankind, the Doctor and Clara try to reason with him. Skaldak eventually learns that the submarine has nuclear warheads, and decides to blow up the Earth in retribution, preferring to go down fighting instead of dying defeated and alone. The Doctor vows that he'll gladly sacrifice himself and everyone on board if it means keeping the web of time intact. He and Clara extend the stalemate with Skaldak — with Skaldak's finger on the button the entire time — long enough for the Big Damn Heroes to arrive: an Ice Warrior spaceship, which picked up Skaldak's distress call after all.

The Doctor explains that the TARDIS vworped off because he finally got the Hostile Action Displacement System to work. She safely parked herself on the Pole... the South Pole.