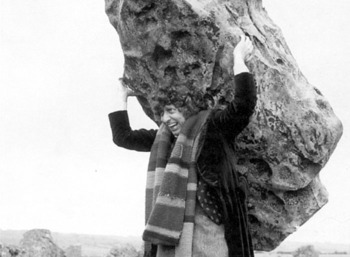 This trope is a kind of Special Effects Failure when light objects are meant to portray other types of heavy material but fail to realistically convey the weight of that material. As the trope name suggests, this often results when fake rocks are made of styrofoam and consequently look too light to be made of stone.

The true weight of a Prop is often revealed by the way it interacts with gravity. When a light prop, such as a styrofoam rock, gets dropped, it will often bounce in a way that reveals how light it actually is. A heavier object would have to be going a lot faster to bounce, sometimes fast enough that the impact would crack the material instead. The prop may also ricochet harmlessly off of actors or other scenery that, in all reality, should have been crushed by the heavy object it represents.

The way that actors handle props can also betray their true weight. Many props are intentionally created to be lighter for convenience. If an actor needs to move an object around quickly, precisely or without laborious effort, lighter props make it easier. Handling or carrying heavy objects over the course of a performance can also wear the actors out, so lighter props preserve their stamina.

It's very common for containers to be empty of their contents simply because it's not visible to the audience. Why bother refilling an actor's coffee cup between takes when he can just pretend to drink from it? But when the actor handles the cup, he can't help but betray that it's too light to be full of coffee.

Related to Hollywood Density, when the prop is too light because the storytellers never realized how heavy it actually would be.