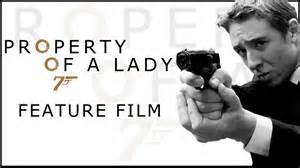 Liam Vaughan is about to shoot you.
Advertisement:

Diamond’s Cut is a James Bond fan film, made in Australia in late 2011. The plot of the hour-long film has 007 going to the Land Down Under to solve the mystery of the recent assassination of M. The film features a cast mostly in their late teens, even for the role of Q, (unintentionally preceding the canonical young Q in Skyfall.), a budget seemingly measured in single digits and intentional So Bad, It's Good quality invoked in order to compensate. It can be watched here

In late 2012, a sequel, called Property of a Lady, was released. Unlike the traditional Bond films, it directly draws upon the story of the first, and has the director himself act as the new M. It also has better directed action scenes and a budget sufficiently increased to afford proper cars for the chase scenes. The link is here