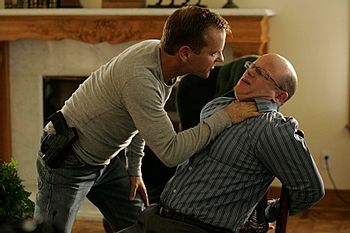 "You are going to tell me what I want to know; it's just a matter of how much you want it to hurt."
"You're not going to get any information out of him if you just ask. You gotta make him scream a little!"
— Captain Bailey, Mass Effect 2
Advertisement:

For all intents and purposes, this is a heroic variant of Cold-Blooded Torture. Usually indicates that there is some kind of Time Bomb hanging over the heroes' heads and the interrogator has decided that there isn't enough time to "play nice." Threats, both outloud and whispered, to kill will be made. Firearms will be discharged. Sometimes this is done after someone has refused to believe an Empty Cop Threat. Of course, anyone who does this is in the first place usually an Anti-Hero at best or a Token Evil Teammate and/or a Nominal Hero at worst. Also, if a suspect knows he only has to hold out for a certain length of time, torture will never work. Good thing Torture Always Works. Should it fail, one can alternate the plan and exact the interrogations on someone else.

In reality, torture is illegal in many jurisdictions (however, that doesn't stop people, and doesn't mean the evidence gets tossed out in all nations), and its actual effectiveness is disputed, depending much on circumstances and individuals. In short, there's no real proof that it works effectively and dependably — it's just as likely that someone will tell you something just to make it stop as anything else, and although the "just make it stop" factor can in fact be countered by systems of threatening even worse retribution if the given information turns out to be false, it is still hardly 100% perfect. Plus, it may turn out that the guy you're torturing legitimately does not have the information you need, but feeds you false info just to make it stop, so not only are you torturing someone who knows nothing, he's sending you on a wild-goose chase instead of staying silent. Someone truly dedicated to a cause may even view this technique as a sign that his enemies are weak or evil, thus enforcing his own convictions and making him more likely to refuse to cooperate. As well as this, even if it does work and the suspect is guilty and confesses, any halfway decent lawyer can get a confession coerced through torture ruled inadmissible, and any evidence found as a result of it being "Fruit of the Poisonous Tree" and also inadmissible, or failing that overturn the conviction, meaning torture can even result in guilty people going free. Interrogation is often a long process over days or weeks, as well. Good luck stuffing that time into an hour-long TV show revolving around a bad guy bomb, though.

It would be especially problematic using evidence obtained through torture in the United States. The Eighth Amendment to the Constitution prohibits "cruel and unusual punishment." Statute Law, specifically 18 USC 1984, the Civil Rights act of 1869, specifically makes it a crime to violate someone's civil rights under color of law. US treaty obligations also cause problems, as they are a signatory to the "Convention Against Torture and Other Cruel, Inhuman or Degrading Treatment or Punishment," of 26 June 1987, and the use of torture is a violation of "The Laws and Customs of War" as set forth in the (Fourth) Geneva Convention, which prohibits even unlawful combatants from being tortured. While executing unlawful combatants is legal under the Geneva Convention, torturing them is not. Even if you are not a law enforcement agent or soldier, trying this can also land you in a lot of trouble. Seriously, Don't Try This at Home.

Things can get even more dangerous if you have a Vigilante Man conducting the interrogation. As he is not part of a legal force to begin with, he is not restrained by the law. He is free to give cruel and unusual punishment, he does not need solid proof to go after someone guilty, he does not need to respect people's rights, and there's no authority you can report him to. And if he is an Anti-Hero, without a "Thou Shalt Not Kill" principle, then things are even worse: he may kill you after you give him the name he needed to continue his search.

Compare: Torture First, Ask Questions Later, and Torture for Fun and Information, when you're not just torturing someone for information, but having a lot of fun doing it, too. Contrast Torture Is Ineffective, for when torture doesn't get the hero the information. Also see High-Altitude Interrogation, where the interrogator just threatens to drop someone from a great height.

To get a shrunken Multi Monster to tell him what Adu Du has planned, BoBoiBoy traps him in a jar and spins him when he refuses to answer.

To get a shrunken Multi Monster to tell him what Adu Du has planned, BoBoiBoy traps him in a jar and spins him when he refuses to answer.