Sean Connery Is About to Shoot You 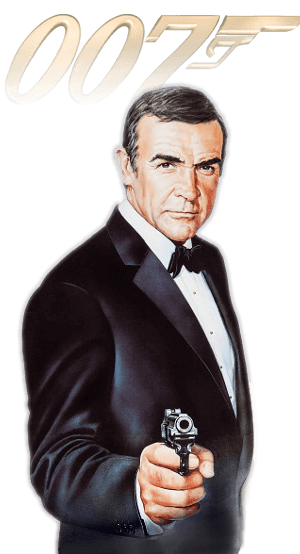 No, Sean Connery! I'm your pal, Sean! Don't do it! I'm your pal, see?
"December 1, 1903: Edwin Porter's The Great Train Robbery debuts. The plot: a wisecracking former cop fights train-jackers at 15 mph. Thrilling audiences with its pioneering realism and papier-mache trains, the final scene — in which the villain turns and fires his gun directly into the camera — was said to have so terrified the audience that they would often shriek in terror, screaming out 'Yippie ky yay, motherfucker!' as one."
— More Information Than You Require
Advertisement:

When a character points a weapon at the camera so it looks like they're about to attack the audience with it. Sean Connery is not actually required; this just happens in a number of posters for his movies, as well as in several Bond film posters, most notably for Never Say Never Again.

The more aggressive Sister Trope of Pistol Pose, this trope is frequently used on movie posters, DVD/VHS cases, and book covers. The star of the work is pointing a gun directly at the audience. It's that simple.

Note that while this usually involves guns, other weapons and even fists can also be used. The "Superman Is About To Punch You!" variant, in particular, is quite common on comic book covers. And certain movies.

This trope is often used in movies themselves as well, although the MPAA prohibits its usage in green-band (all ages) trailers. If the character actually attacks the audience, it's The Fourth Wall Will Not Protect You.

See also Second Person Attack, Pistol Pose, Stab the Sky. Often overlaps with Floating Head Syndrome. Sword Pointing is a variation. Not to be confused with Bond Gun Barrel (which, nonetheless, often features this trope, sometimes literally). Posing for a photo like this in real life, if it's a real gun, and if a person is holding the camera, is a rather serious breach of Gun Safety rules. So Don't Try This at Home.

Rei Furuya will shoot you

Part of Zero's Tea Time OP "Shooting Star" where Furuya aims his revolver at the camera.

Alternative Title(s): Target The Audience, Sean Connery Is Going To Shoot You

Rei Furuya will shoot you

Part of Zero's Tea Time OP "Shooting Star" where Furuya aims his revolver at the camera.