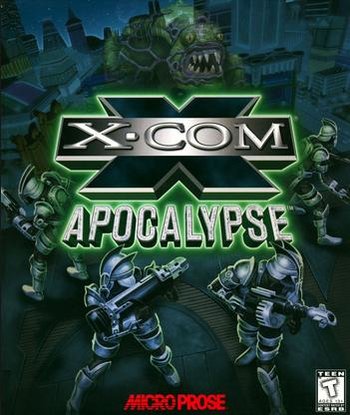 X-COM: Apocalypse (1997) is the third game in the X-COM series. Like its brethren, it was published by MicroProse in 1997 for DOS and Microsoft Windows. It's also one of the last games produced by Julian Gollup's company, Mythos Games, before they went bust.

Time: Eve of the 22nd century. Place: The city of Mega Primus. The last battle of T'leth severely damaged the ecological balance of Earth. As a result, several walled cities have been erected to maintain the population, with Mega Primus being the first. Aliens are at it yet again, this time appearing through inter-dimensional portals in a bid to take over. So it's up to you to use your resources as X-Commander to make sure that Mega Primus is safe.

Apoc is an odd duck. It's as much as city-sim as it is a strategy game in the mold of Syndicate. As with the previous X-COMs, your job is to defend against aliens. But instead of defending the planet, you defend a city. You still have most of the old alien tech at your disposal, as well as a few other tricks (androids and half-Sectoid psychics for recruitment). You have a wider variety of choices in vehicles, and can outfit them to your liking, i.e grafting lasers onto fast-as-hell hoverbikes and sending a pair of those at a UFO before calling in heavier craft. You also have the option to play in real-time; MicroProse have taken a side-step here and opted to focus on real-time rather than turn-based action.

Politics still play a role, with each neighborhood being owned by a seperate conglomerate. Each company have their own staff, budget, weapons, and vehicles. If a faction becomes your enemy, they deny you any special services and products they would otherwise provide. Hostile factions may also attack and raid one another, depending on their philosophy. Players can join in on the fun, too: Fed up with a company? Then destroy it beyond all recovery. (They need funding too, and if you hollow out their buildings and raid them...) Everything in the city is destructible. After a big fight, whole districts can become one giant landfill.

In the developer's zeal to change their most successful build while retaining the basic concept, Apocalypse was a game whose reach exceeded its grasp. It could have been a lot better if MicroProse had allotted more time to the developers — but naturally it could also have been worse. Its influence on the current iteration of the franchise is obvious from the Skirmishers in War of the Chosen. Chimera Squad is another game which drifts sideways and takes place in a Mega City where XCOM serves as a coalition of multi-species police. However, Chimera Squad is markedly different in theme and scale.

An open source clone (OpenApoc) is in the works,