Video Game / X-Men II: The Fall of the Mutants 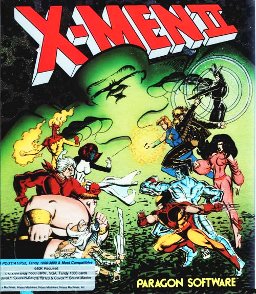 X-Men 2: Fall of the Mutants is a role-playing DOS game for the PC. It follows the basic story of the X-Men crossover storyline "Fall of the Mutants", and is a "sequel" to the PC-only game/storyline Madness in Muderworld.
Advertisement:

The X-Men have come looking for their allies Storm and Forge, only to run into Freedom Force, who've been sent to capture them. Soon both teams find themselves caught in a bizarre time warp caused by the powerful being known as the Adversary, who has imprisoned Storm and Forge. Uatu the Watcher appears at the beginning and introduces the game as a parallel universe's version of the story from the "real" Marvel timeline in the vein of Marvel's What If? series. In this case, "What if a different team of heroes fought the Adversary?" To answer this question, the player forms a team of heroes from a choice of 15 past and present X-Men.

The game uses an overhead view during normal play as characters move around the map, as they look for enemies, health crates, and traps. When the X-Men encounter an enemy, the game switches to a side view close-up during the battle scenes. In each level the object is to search for a pair of Freedom Force members and defeat them in battle, but only the defeat of one villain will send the player's team to the next level. After completing enough levels the heroes are thrust into battle with the Adversary himself.