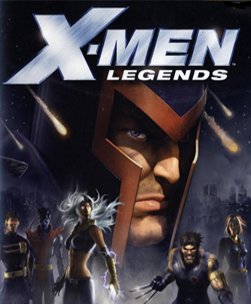 Alone, you are mighty. Together, you are legends.
— Professor Charles Xavier
Advertisement:

A series of console video games developed by Raven Software and released by Activision. Two games were made, X-Men Legends (2004) and its sequel, X-Men Legends II (2005). Both games featured Marvel Comics' X-Men traveling all over the globe to save the world by defeating one of their most powerful villains - Magneto in the first game, Apocalypse in the sequel.

Gameplay in the majority of both games had squads of four X-Men (and their allies), chosen from a large roster of available characters, controlled by up to four players. Some sections used fewer than four characters (since this left the players in excess of the available characters with nothing to do, it was much less frequent in the sequel) and some sections required or banned the use of specific characters (especially early in the game, before the entire roster was unlocked). If there were fewer than four players the computer would control any extra characters, with the players able to assume control of any character not currently controlled by another player at will. Each character had an array of powers that could be unlocked and improved as the game progressed, and could also pick up equipment that boosted their abilities.

The first game largely revolved around Allison Crestmere, codenamed Magma, the Point of View character, being recruited into the X-Men, while the team tries to defend humanity from a devastating attack by Magneto and his minions, the Brotherhood, while simultaneously protecting mutantkind from Gen. William Kincaid's Sentinel robots.

Followed by the Marvel Ultimate Alliance games, the first of which was also developed by Raven Software.