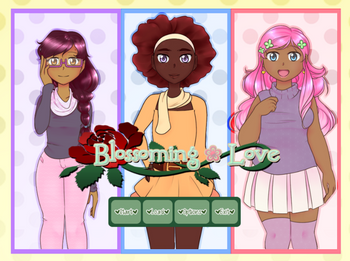 Blossoming Love is a freeware Visual Novel developed by newcomer team krispycat, using the Ren'Py engine. The demo was created for Yuri Game Jam 2015, and a full version of the game is tentatively scheduled for late 2016.

Ivy has been a shy wallflower all her life, and the discovery she's capable of magic has made her decide to take the first steps in changing her life around. Having just been accepted to Lirio Academy, a magical college, Ivy takes the first steps towards blooming into a more confident person...and meets three cute girls on her first day of school. Could love possibly be in the cards for Ivy as well?

The demo can be downloaded here.