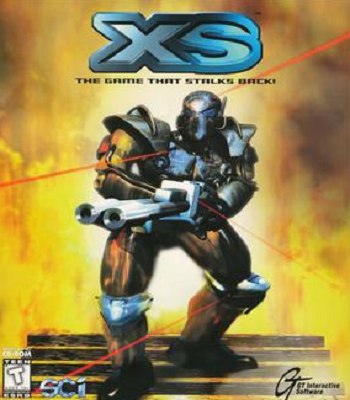 XS is a First-Person Shooter released by SCi and GT Interactive on December 31, 1996 for DOS PCs. While not a runaway success, the game introduced many aspects (like shielding) which were later used in games such as Unreal.
Advertisement:

The game is set in the far future during a gladiator-style blood sport. The main character was told about the event by an associate who is believed dead at the start of the game. The player has to fight through a number of rounds of free for all deathmatch-style combat, choosing a pair of weapons to use before the match begins. The battles are to the death with the corpses of the losers used as meat for fast-food burgers.