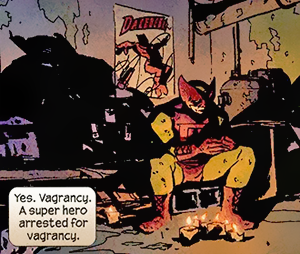 There is the hero that drifts from place to place helping people as he walks the earth. Then there are these heroes: ones that stay in the same place, but are so down on their luck that they live in squalor or, worse, have no place to live at all.

Perhaps their dedication to doing heroic deeds provides them with little time for making money or starting a home or family. Or perhaps they've had a string of bad luck, sometimes due to a decidedly non-heroic addiction. In any case, even though they may save lives, normal people will still dislike them.