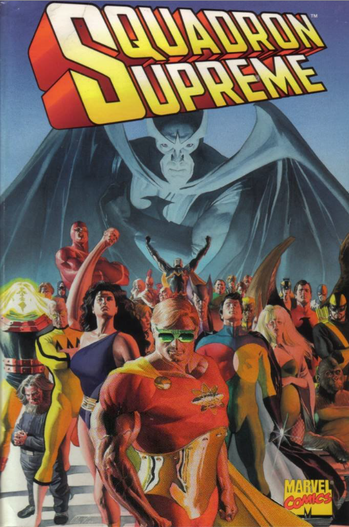 The original and still the best.
"We should not just randomly stop super-criminals, an alien invader, or a natural disaster, and leave the rest of the world's problems unaddressed... problems which inflict the majority of mankind with suffering and death."
— Hyperion
Advertisement:

A team of Justice League Captain Ersatzes who starred in a twelve-issue Marvel Comics comic book miniseries credited with being one of the earliest Deconstructions of the superhero genre (it came out in the mid 1980s, preceding DC Comics' Watchmen, but following Spider-Man).

The Squadron Sinister, four villainous Captain Ersatzes of the Justice League of America, were created by Roy Thomas and Sal Buscema and first introduced in 1969. They clashed with The Avengers in an unofficial intercompany crossover, with the two teams manipulated by Kang the Conqueror and the Grandmaster in one of their schemes. Subsequent stories focused on their heroic equivalents, the Squadron Supreme, which existed in the alternate universe of Earth-712. The Squadron Supreme themselves clashed with the Avengers in 1971 and 1975, with at least one of these encounters due to mind control.

Squadron Supreme came into its own in Mark Gruenwald's 1985 limited series. It takes place on a post-apocalyptic Earth; flashbacks reveal that the Squadron Supreme was dominated by the alien Overmind, who used them to turn the United States into a fascist nation and conquer the planet. After the defeat of the Overmind, the Squadron decide that the best and fastest way to repair the shattered infrastructure, quell civil unrest, and restore people's faith is to take control of the world and get it back on track. The Squadron also decided to take the opportunity to address all of the world's problems, vowing to eliminate hunger, crime, war, poverty, and disease. With little resistance, the Squadron appeared on national television and announced their "Utopia Program", promising to return control after a year.

The series chronicles the Squadron's yearlong efforts; their steps include forcible disarmament of the world's armies and individual gun owners, inventing a "behavior modification" device for brainwashing criminals against crime, developing non-lethal weapons and personal force-fields, and creating life-sustaining hibernaculum to keep the terminally ill in suspended animation. Along the way, the Squadron must deal with dissension from within and without, along with assorted super-powered threats, and their continued slide down the slippery slope of morality. And watching them all is former team founder Nighthawk, who assembles his own team to stop the Squadron's super-fascism...

Squadron Supreme: Death of a Universe was released in 1989. It had little relation with the world domination theme, being instead a Take That! to Crisis on Infinite Earths. The team was moved to the normal Marvel Universe, and returned years later to their original world. The world domination theme is taken again in Squadron Supreme: New World Order, but on the other side: during their absence, their utopia tools were turned into the tools of a police state, and the Squadron became outlaws fighting against it.

The team was later given an Ultimate Universe version in the mature-rated Supreme Power series in 2003.

In 2015, Marvel announced a new Squadron Supreme series following Secret Wars (2015), taking place in the normal Marvel Universe, featuring versions of the Squadron's members from universes that had been destroyed in the events around Secret Wars. Another Squadron Supreme were also the main focus of Heroes Reborn (2021), set in a world where the Avengers never existed.

Tropes used in the Squadron Supreme limited series include: