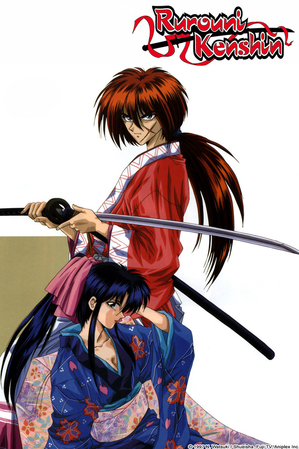 "It was to create a world of peace, not to win positions of power, that we raised our swords and killed. If we forget that, then we are no revolutionaries after all."
— Himura Kenshin
Advertisement:

Rurouni Kenshin (るろうに剣心, Kenshin the Wanderer), also known as Samurai X after Columbia Pictures renamed it for their anime releases (which was later co-opted by ADV Films for their release of the movie and OVAs)note Watsuki, being a major fan of the X-Men comics (the characters from which he based a lot of the cast's designs on), heartily endorsed this title translation., is a shonen manga by Nobuhiro Watsuki, which was serialized in Weekly Shonen Jump from 1994 to 1999.

The series is set in year Meiji 11 (1878), a time of peace after the turbulent Meiji Restoration and the abortive Satsuma Rebellion. Kaoru Kamiya, the spirited young head of the Kasshin Kamiya Kendo School, is fending off some hooligans who want to seize her dojo when she acquires the last-minute help of a mysterious vagabond.

It turns out that this stranger is Kenshin Himura, a former assassin for anti-shogunate forces during the early days of the Restoration. Regretting his former life as the infamous "Hitokiri Battōsai" — the "Quick-Draw Manslayer" — Kenshin now wanders Japan as a vagrant soul, seeking atonement for his sins by using his outstanding swordsmanship to right wrongs without spilling any more blood. To that end, he carries a sakabatou: a katana with the sharp and blunt sides reversed.

Along the way, Kenshin meets new friends — Sanosuke Sagara, a veteran of an extremist group; Yahiko Myōjin, a street urchin and aspiring samurai; and Megumi Takani, a doctor he rescued from her unintentional involvement in the opium trade. At the same time, however, he must also deal with many enemies, some of whom are stark reminders of who he used to be.

The series is notable for defying several established Shōnen conventions. It features an older hero (Kenshin is 28, which is ancient by the demographic's protagonist standardsnote Kenshin was supposed to be even older, but Jump's editor didn't allow a Shonen protagonist more than 28 years old. — not that he looks it) who is world-weary and tired of fighting, instead of a wide-eyed young lad eager for adventure. Other themes which are rarely seen in this demographic, such as politics, multi-layered romance, and the struggles of adapting to a vastly changing world, pop up as well. This is what contributed to the legendary Multiple Demographic Appeal of the series, which crossed age, gender and national boundaries with equal ease.

The anime television series, which aired from 1996 to 1998, was followed by two OVAs — Tsuiokuhen/Samurai X: Trust & Betrayal, a prequel adapting a manga arc, and Seisoushen/Reflections, an anime-original sequel. A Non-Serial Movie, Requiem for the Ishin Patriots, was also released. The entire Sony dub of the anime is available to watch on Hulu

hosts both the subtitled series and the non-Sony/Animax English dub.

Watsuki announced that he would be working on the series again on May 2, 2012 — Rurouni Kenshin Cinema-ban is a loose adaption of the first live-action movie; it was a short monthly run at Jump Square magazine.

There is also an anime OVA series, New Kyoto Arc, remaking the Kyoto arc and a spinoff manga Master of Flame focusing on the villains from it. Another short manga for the series debuted in 2017 called Ruroni Kenshin Ibun: The Criminal Ashitaro, and introduces the titular boy as an ex-criminal and budding "11th sword" of Shishio who is, by the end of it, trained and mentored by Kenshin along with another ex-criminal named Alan Inoue. The spinoff sets itself up as a prelude to a new "Hokkaido Arc" starring the remaining Kenshin cast, which started its run in late 2017.

Watsuki's assistants while writing this series included Eiichiro Oda (One Piece) and Hiroyuki Takei (Shaman King), both of whom Watsuki credits with designing several characters.

On Aniplex Online Fest 2022, it's announced that a new TV series that retells the manga story is in production.

It's a more direct manga adaptation in the same vein of Full Metal Alchemist Brotherhood. Additionally, the voice cast is reshuffled, with Soma Saito as Kenshin and Rie Takahashi as Kaoru.