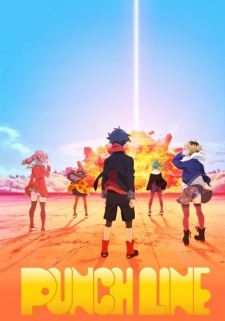 Punch Line is an ecchi comedy Anime series, made by MAPPA and written by Kotaro Uchikoshi (of Zero Escape and Ever17 fame) for the noitaminA block line-up for Spring 2015 Anime season.

Yuta Iridatsu is not having a good day. It all started when the bus he was on was hijacked. Thankfully, Strange Juice, the ally of justice, appeared and managed to defeat the terrorists! But one member was hiding among the passengers and put the heroine at his mercy. It is then that Yuta catches a glimpse of Strange Juice's panties... which gave him a power-up?!

He uses his new found strength to throw the villain along with himself out of the bus, both of them falling into the river. Strange Juice saves him and once again, he sees her underwear, which makes him pass out. When he comes to, he finds himself at his apartment building, the Koraikan. What's more, he's now a ghost! Another ethereal being, a cat-spirit named Chiranosuke, explains to him that no, he is not dead, but simply suffering an out-of-body experience. The bad news is, some other ghost used this opportunity to possess Yuta's body, locked himself up in his room and placed magic seals so that no spirit can enter.

The ghost boy has only one hope if he wants to reclaim his life - he must embark on an epic quest to find the Nandala Gandala - the sacred book of ancient India, with houses information on a secret ritual that will help him repossessing his body. The location of this enigmatic grimoire is... somewhere in Koraikan. Yuta goes to look for the Nandala Gandala, which accidentally leads him to see panties of his NEET neighbor, Ito. Once again, power wells up in him, but in panic he goes and witnesses yet another panty shot. This one gives him a massive nosebleed... and causes a giant asteroid to crash into Earth, destroying all life on it.

No worries, though! Since he's a spirit now, silly things like quantum physics don't apply to him anymore. As such, he can go back in time and try again, always keeping in mind to avoid arousal, or he will bring doom on the entire human race... again. Things get even more complicated when he finds out that his sweet idol neighbor, Mikatan Narugino, is actually Strange Juice! And on top of that, Koraikan's manager, Meika Daihatsu, knows this and aids her, with includes a massive underground base beneath the apartment building!

And so Yuta's odyssey begins, filled with ghosts, Time Travel, super heroes, idols, terrorist organizations, world destruction and panty shots. Lots and LOTS of panty shots. And, somewhere along the way on this comedy of cosmic proportions, maybe he'll figure out what's the punchline supposed to be.

The show, in all its insane glory, is licensed in North America by Sentai Filmworks. It can be watched on Crunchyroll

. A Visual Novel version of the series that re-tells the events of and contains several clips from the anime released on the Playstation 4 and PlayStation Vita in mid-2018.