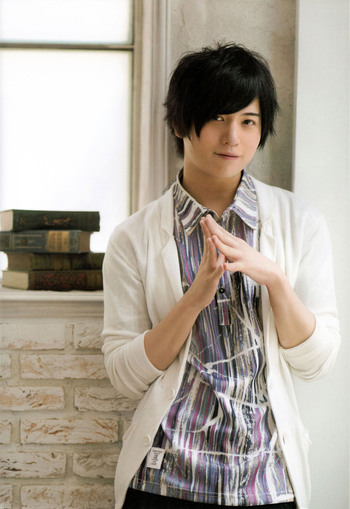 A Japanese voice actor (born on April 22, 1991) affiliated with 81 produce. He began his voice acting career in 2011 mostly voicing minor characters but started gaining more noteworthy roles in 2014 after voicing leading characters in Akame ga Kill! and Terror in Resonance which both aired in the same season. He's often cast as the Kid Hero but he also has a number of roles as an Anti-Hero territory or Anti-Villain.

Interestingly enough his career is very similar to that of Sora Amamiya who he has developed a working relation with. Both have voiced leading roles together in Akame ga Kill!, Divine Gate, and World of Final Fantasy. His vocal range is also very similar to Tetsuya Kakihara.

On top of his very extensive voice acting career, he launched his music career in 2017. Known for composing and writing much of his discography (which is extremely rare), his eclectic stylings and unique narratives have garnered much attention, gaining much critical and public acclaim as a result.

He also released an essay collection in 2018, fulfilling his long-time dream of becoming a writer.