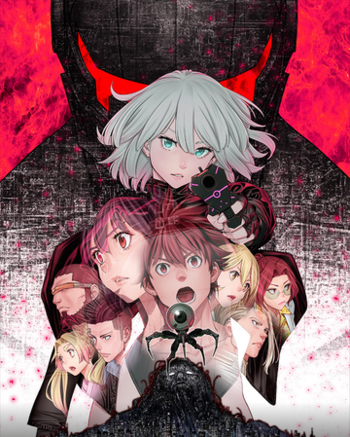 "Declaring war against all of the SF series around the world!!"
Advertisement:

In 2014, Akira Natsume seems to almost have a phobia of electrical devices while also being very good at diagnosing them. He resolves to change himself for the better and get a girlfriend like his older brother did. But then, Akira suddenly dies in an accident. 16 years later a special policewoman and her android partner retrieve and activate a highly advanced AI and superweapon called EX-ARM and put it into full control of their ship as a last resort. Turns out the AI is actually just Akira's brain.

Now reduced to a small machine, Akira works with the police to fight crime in Tokyo. This puts him in the conflict of several other EX-ARM users. Luckily, his new body grants him many new abilities, such as hacking into cameras and watching the entire city, or take over Alma's body to fight directly.

EX-ARM is a sci-fi seinen manga series written by HiRock and illustrated by Shinya Komi, which ran in Miracle Jump from 2011 to 2013. The series also has an anime adaptation thanks to Crunchyroll, who produced it as a Crunchyroll original. It's an All-CGI Cartoon (for the most part) and was released on January 11, 2021. Notably, the main staff hasn't had experience making anime before. Instead, the main staff has worked in live-action action films, with the hopes that their experience on choreography would go hand-in-hand with an action-heavy series. See the poster above? The final product looks nothing like it.

The manga was rather abruptly declared cancelled by its publisher, Shueisha, in March 2021, only 10 chapters into its Sequel Series, EX-ARM EXA.