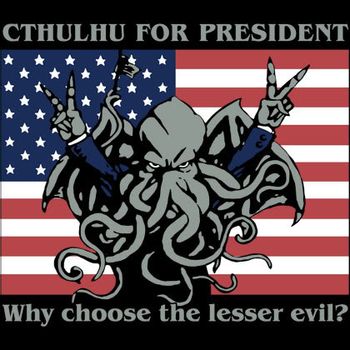 But he seemed like such a nice guy during the election!
"Computers may be twice as fast as they were in 1973, but the average voter is as drunk and stupid as ever. The only one who's changed is me. I've become more bitter and, let's face it, crazy over the years. And when I'm swept into office, I'll sell our children's organs to zoos for meat, and I'll go into people's houses at night and wreck up the place! Woahahahahaha!!"
— President Richard Nixon's Head, Futurama
Advertisement:

A Corrupt Politician with far more success than most. This supervillain doesn't just have an Elaborate Underground Base, they have their own country, often a Ruritania, Banana Republic, or Qurac. Just like the Evil Overlord, but with an international scope. This affords them so many resources and so much power that the heroes often are never able to truly beat them.

Usually, the heroes aren't fighting against the country itself, apart from the occasional loyal citizen who's been turned into a Super Soldier. Their beef is strictly with the villain, and the country is usually just a convenient plot device. Alternatively, and more poignantly, it may be their own country that elects President Evil, who may then also qualify as a Glorious Leader. (If he rules America, expect his policies to make the Land of the Free unrecognizable if left in place for too long.) His enemies will then be forced to choose between their loyalty to the state and its laws on the one hand, and the need to dethrone its corrupt leadership on the other.

The villain's leaderly reputation varies between Villain with Good Publicity and 0% Approval Rating. Sometimes, the heroes go into the country and foment a rebellion to get the villain kicked out; naturally, this often leads to someone even worse stepping up (as with Hitler's Time Travel Exemption Act) and an Enemy Mine storyline to restore the status quo. Or, the "oppressed masses" are actually Gullible Lemmings who like their leader, and might not be oppressed at all!

See also The Caligula. A Different sort of President. If it's a superhero who rules a country, see President Superhero. If the supervillain not only rules over others but rules because of their superpowers, see Super Supremacist. President Evil's VP may be the equivalent of an Evil Chancellor, though this is not necessary. This may also be how President Evil himself started out, if something happened to his running mate.

In terms of the ranks of Authority Tropes, the tropes that are equal are God Save Us from the Queen!, The Woman Wearing the Queenly Mask, and The High Queen. The next steps down are The Evil Prince, Prince Charming, Prince Charmless, Sheltered Aristocrat, Warrior Prince, The Wise Prince, and all Princess Tropes. The next step up is The Emperor.

If the President Evil has the same name as a Real Life president or is an Expy of a real president, then this is Demonization. For very obvious reasons, no matter how tempting it may seem, No Real Life Examples, Please! Some examples post-2016 may overlap with Trumplica, and that's all that really needs to be said about it.

In the Evaporate video "Acid Rain", Nerv reveals that the acid rain plaguing the country was caused by the actions of President Donald Lincoln. To cement his vileness, the President is accompanied by Bowser's Evil Laugh from Hotel Mario.

In the Evaporate video "Acid Rain", Nerv reveals that the acid rain plaguing the country was caused by the actions of President Donald Lincoln. To cement his vileness, the President is accompanied by Bowser's Evil Laugh from Hotel Mario.