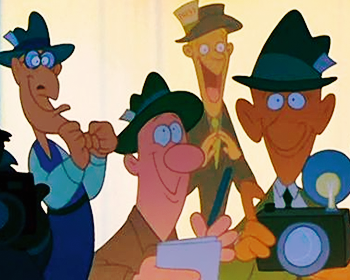 "I will bet good money the man who took this picture had a card saying "PRESS" tucked into his fedora."
— The Dark Id during his Let's Play of Resident Evil 3
Advertisement:

Ah, the Press. Without them, we would never have such convenience in the spread of information. Part of the spread of such information is to go to locations and find important stories to cover.

Back when hats were regularly fashionable, the way someone from the Press would have designated their status was to have their press pass in their hat, between the hat and the band around the hat's crown.

Because of Press details needing to be shown, it was typically a white placard with the word Press printed on it. The reporter might need both hands free to take notes.

This seems to be a little less common nowadays, especially with hats falling out of style in the last half-century. Still, they act as a reminder of the presence of a reporter and are more convenient than wearing a tag anywhere else.

Because Real Life examples are completely pointless, please refrain from adding any examples from reality. Check out Media Scrum, Hat of Authority and Fedora of Asskicking.