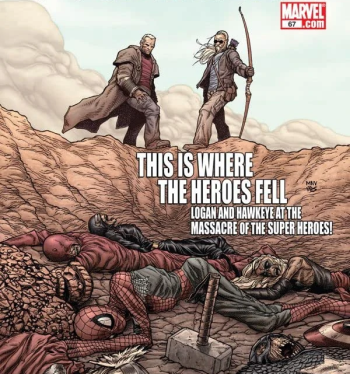 "The Wastelands" (Earth-807128) is the setting of the comic book Old Man Logan, a Bad Future where supervillains united forced and killed all superheroes, turning the United States into a dystopia. The storyline was popular enough to later spawn a miniseries set during the Secret Wars (2015) event, an ongoing series set in the main Marvel universe, Old Man Hawkeye — a prequel set five years before the original story — and Old Man Quill, a miniseries focusing on what happened to Star-Lord and the Guardians of the Galaxy in this universe.
Advertisement:

Late 2018 introduces the twelve-issue series Dead Man Logan, a Grand Finale where Logan's healing factor gives out on him, leaving him with twelve months to live, ensure his potential future is no longer a possibility for the Marvel Universe, and return to the Wastelands to rust in peace next to his late beloved wife.

A sequel/spinoff mini-series titled Avengers of the Wasteland began in early 2020, following Dani Cage, Bruce Jr. and Dwight Barret as the new Ant-Man, as they try to fight Doctor Doom and bring peace to the Wastelands.

It was announced that Marvel would make more related comics in December 2021. "The Wastelanders" will be a number of limited series, focused on Logan (a sequel to the first miniseries), Hawkeye (trained by Matt Murdock after he lost his sight), Doom, Starlord, and Black Widow.

Comics in the setting: