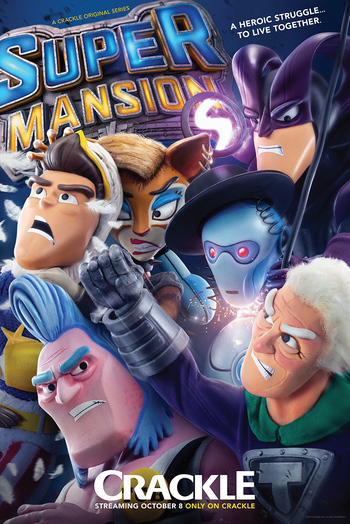 About as serious as it looks.
Advertisement:

Supermansion is a stop-motion animated series from the creators of Robot Chicken. It's about aging superhero Titanium Rex (Bryan Cranston), who is the leader of the League of Freedom. The league contains a wide variety of superheroes, most of which are expy's of other superheroes.

The series was distributed on Crackle prior to Sony selling their remaining stake to Chicken Soup for the Soul Entertainment in 2019. As of February 2022, the series is available on Tubi. It used to air on Sunday nights on Adult Swim.