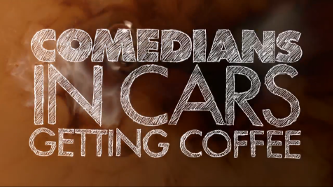 Yep. That's it. Nothing else happens.
"You've finally made a show about nothing."
—Larry David to Jerry, during the first episode.

Comedians in Cars Getting Coffee is a web series created by and starring Jerry Seinfeld, which features him inviting fellow comedians along for a drive and some coffee. Not surprisingly, the humor comes from the conversations between Seinfeld and his guests. In addition to being funny, you also get to see Seinfeld and other comedians as regular people — though very funny regular people — rather than the celebrities they've become.

As of April 22, 2017, nine seasons with a total of 60 episodes have been made, ranging from as short as six minutes to as long as twenty-twonote This is counting the Jimmy Fallon two-parter as two separate episodes, with most in the 11-18 minute range. There are also short clip videos called "Single Shots" which center on common threads between the conversations, such as donuts or the sound a ketchup squeeze bottle makes when it releases its contents, or within the episodes, e.g., left turns or the closing of the car doors to rhythm.

Episodes were originally available on YouTube, Sony's Crackle, and its own site

. However, as the series is moving to Netflix, the episodes have been removed from the last.

Some of Jerry’s guests to date include:

Tropes associated with the series include: