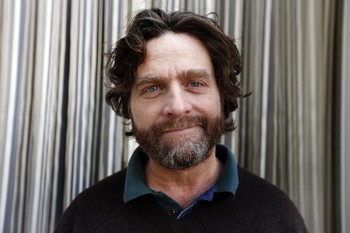 Zachary Knight "Zach" Galifianakis (born October 1, 1969 in Wilkesboro, North Carolina) is an American comedic personality perhaps best known for his starring role in the Funny Or Die web series Between Two Ferns, a satirical talk show where he interviews high profile celebrities from Michael Cera to Justin Bieber to Barack Obama. He's had central roles across television and movies, most notably The Hangover series and Baskets. He's also a frequent collaborator with Tim Heidecker and Eric Wareheim, and had a brief stint as a writer on SNL.

Galifianakis is frequently cited as a Hollywood Nice Guy, and has been openly critical in his opinion on celebrity culture (which is once again reflective in his good-natured jabs in Between Two Ferns).

Some of his works: