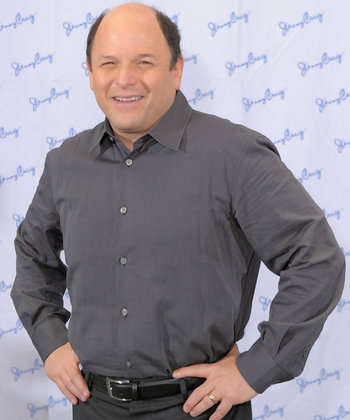 "The greatest part of the job was... that was for nine years it was a pleasure to go to work."
—Jason Alexander, summing up his time on Seinfeld
Advertisement:

Jay Scott Greenspan, otherwise known as Jason Alexander (born September 23, 1959 in Newark, New Jersey) is an American actor known to the world as the one and only George Costanza from Seinfeld.

In actuality, the man is an accomplished performer on the stage, having won a Tony Award for his singing contributions. However, it would be his role as George Costanza, Jerkass extraordinaire and best friend to main character Jerry Seinfeld that would make Alexander a true household name. Being named "the greatest sitcom character of all time" by none other than Ricky Gervais, Alexander's accolades for the role included Emmy and Golden Globe nominations, as well as a win at the Screen Actors Guild Awards. One could say that, along with Michael Richards as Kramer, he became a Breakout Character on the show.

His son Gabriel Greenspan is also an accomplished actor.

Tropes associated with Jason include: