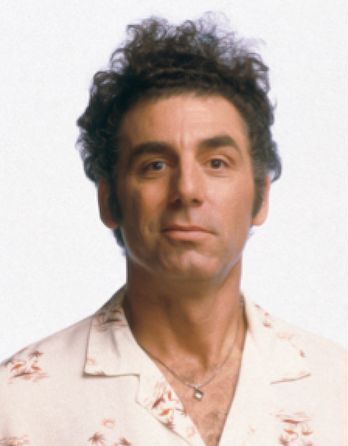 Kramer or Stanley? You decide.
Advertisement:

Michael Anthony Richards (born July 24, 1949 in Culver City, California) is an American actor, writer, television producer, and retired comedian best known for his three-time Emmy-winning role as Cosmo Kramer in the sitcom Seinfeld, which offered a pretty good idea of the types of characters he plays.

Richards began his career as a stand-up comedian, with a feature on Billy Crystal's first cable TV special providing his first big break. He then went on to become a series regular on Fridays and make guest appearances on numerous shows. Following the end of Seinfeld, he also starred in a sitcom of his own, The Michael Richards Show, although it was cancelled after two months due to poor ratings.

Richards' primary career venture after Seinfeld was returning to stand-up, although this would culminate in a night of infamy that, over a decade later, has still proven inseparable from his reputation in the public consciousness.

During a set on November 17, 2006 at the Laugh Factory, Richards received reported heckling and interruptions from a small group of black audience members. In his words after the fact, anger got the best of him and he tried to defuse the chatter by being as outrageously offensive as possible. But in a video recording of the event from the crowd that soon spread online, Richards was seen launching into a racist rant, making references to slavery and the Jim Crow era as well as repeatedly shouting the N-word, shocking his audience.

Richards publicly apologized several days later on The Late Show with David Lettermannote His apology was met with laughter from the studio audience such that Jerry Seinfeld, Letterman's guest at the time, had to step in briefly and reprimand the audience, and reportedly issued private apologies to civil rights leaders Al Sharpton and Jesse Jackson, but the damage was thoroughly done by that point. Both Sharpton and a member of the group that Richards had directed his rant at went on record refusing to accept his apology.

In the years since, Richards' screen work has been sparse but has included a voice role in the Seinfeld-starring Bee Movie, an appearance in Curb Your Enthusiasm as himself in which he poked fun at the incident, and a co-starring role on the sitcom Kirstie, which was cancelled after one season. He also appeared in a 2012 episode of Seinfeld's Comedians in Cars Getting Coffee, where he admitted that the incident still haunted him to that day and played a major role in his retirement from stand-up.

Other roles with TV Tropes pages: