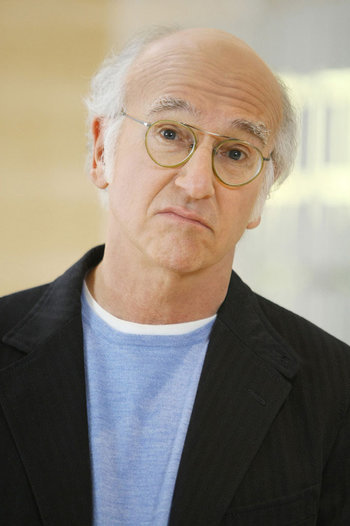 Lawrence Gene "Larry" David (born July 2, 1947 in New York City, New York) is an American actor, writer, comedian and producer. He's most famous for being the co-creator and Showrunner of Seinfeld, and the creator of Curb Your Enthusiasm, where he stars As Himself.

David began his career as a stand-up comedian, and was a writer for Saturday Night Live between 1984-85, without much success. Most of the sketches he wrote were either aired after Weekend Update, which is where a lot of mildly funny and/or experimental sketches were left to rot in the dress rehearsal tapings, or not even considered for broadcast. Prior to his unhappy stint on SNL, he was a cast member on the ABC knock-off of SNL, called Fridays (which was where he first met Michael Richards — the actor who would later be known as Cosmo Kramer), where David was more involved in the sketches (he was one of the repertory players, along with Richards). His recurring characters on Fridays include Rabbi Feinberg of the Matzoi Rabbis (along with Bruce Mahler)note the Matzoi Rabbis were a pair of rabbis who taught people self-defense, often breaking stacks of matzo bread and were depicted as kung-fu masters and James Bond-style secret agents in two separate movie parodies and Sully Muller (a temp worker who covers jobs that don't normally call for a temp worker, like a speaker for The National Organization for Women, a lawyer during a high-profile murder trial, a member of The Beatles, and the U.S. Secretary of State). David also played Larry Fine on Fridays' take on The Three Stooges (Moe was played by Bruce Mahler and John Roarke was Curly), which have the trio as bumbling burnouts trying to get high off everything from marijuana to cocaine.

In 1989, along with comedian Jerry Seinfeld, he created the revolutionary sitcom Seinfeld, which went on to became one of the most popular shows of The '90s. Seinfeld was so successful, that pretty much everything about it was copied. David based the character George Costanza, probably the biggest jerk in a show about jerks, on himself. He had many bit parts on the show (usually offscreen voices), the most memorable being the voice of George Steinbrenner. He left Seinfeld after the seventh season, but returned to write the finale.

In 1998, he wrote and directed a movie called Sour Grapes, which was a failure. In 1999, he made a one-hour long special for HBO, called Larry David: Curb Your Enthusiasm. The special was a Faux Documentary about him preparing for an HBO special, and eventually weaseling out of it. It was originally envisioned as a one-time project, but it was so successful, that in 2000, David created Curb Your Enthusiasm, where he plays himself as a selfish, annoying, neurotic Jerkass. As of 2020, Curb had ten seasons, with ten episodes each, due to David writing or co-writing all the episodes. In 2001, he created and voiced in The Paula Principle. In 2007, he made a guest appearance As Himself in Hannah Montana with his then-teenage daughters. In 2009, he played the main role, a misantrophic Lemony Narrator, in the Woody Allen film Whatever Works. In 2012, he appeared in the The Three Stooges movie, playing a nun. In 2013, he wrote and starred in the HBO film Clear History.

In 2015, he returned to SNL for guest appearances, playing presidential candidate Bernie Sanders (who, coincidentally, he's actually related to

), and hosted on February 6, 2016, becoming the first cast member from Fridays to host SNLnote originally, Michael Richards was supposed to host back in 1994, but was replaced with Nancy Kerrigan and the second SNL writer after Conan O'Briennote who was only hired as a writer and, despite appearing as a background character in most sketches, was never hired as a cast member to come back and host.